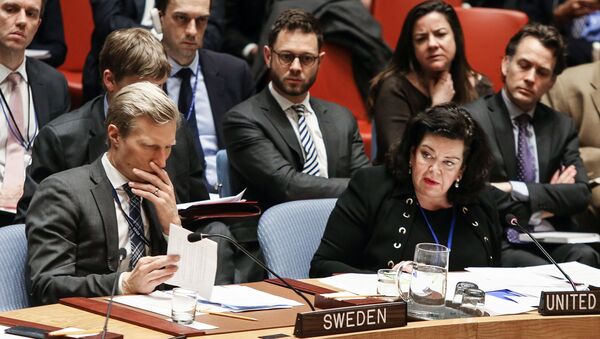 © Sputnik / Нэнси Сисель
/
Go to the mediabank
Subscribe
International
India
Africa
WASHINGTON (Sputnik) - UK Ambassador to the United Nations Karen Pierce said during a UN Security Council meeting that she will present a draft resolution on Yemen on Monday.

"We will, as pen holder, bring a draft text of a resolution to partners on the Security Council on Monday," Pierce said on Friday.

Yemen descended into civil war in late 2014, when the Shiite Houthi militia overthrew the government of President Abdrabbuh Mansur Hadi. Saudi Arabia and a coalition of mostly Persian Gulf states began operations to try to restore the Hadi government in March 2015.

The Saudi-led coalition's conduct in the war, including the blockade of Houthi-controlled ports, has been condemned by the United Nations for causing a humanitarian disaster.

According to UN figures, over 14 million Yemenis face pre-famine conditions. Late last year, the UK-based Save the Children organization estimated that 50,000+ Yemeni children died from starvation in 2017 due to the war.