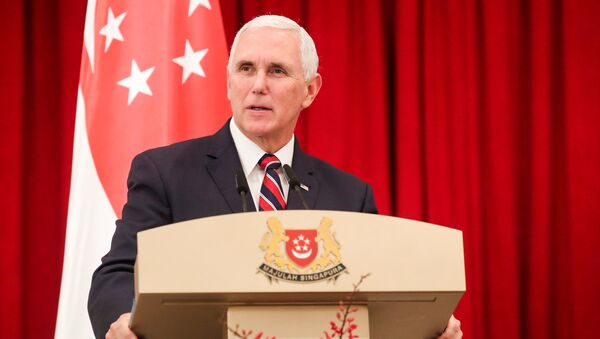 The United States seeks to ward off spreading Chinese influence in Asia's seas by practicing "freedom of navigation" operations - naval and aerial activity in what China believes to be its own territory.

US Vice President Mike Pence has said that the contested South China Sea isn't the domain of any country, challenging Beijing's claims to the resource-rich region.

"The South China Sea doesn't belong to any one nation, and you can be sure: the United States will continue to sail and fly wherever international law allows and our national interests demand," Pence said on Friday.

The South China Sea doesn’t belong to any one nation, and you can be sure: The United States will continue to sail and fly wherever international law allows and our national interests demand. #VPinAsia pic.twitter.com/Tkn87vrnJN

Pence, who travelled to Singapore to attend the ASEAN-US summit, told South Asian leaders on Thursday that there was no place for "empire and aggression" in the Indo-Pacific — a noticeable nod towards Beijing's regional ambitions.

US Vice President Mike Pence earlier this month accused China of "malign" efforts to undermine Trump ahead of the November midterms and reckless military actions in the disputed territories in the South China Sea, charges that China denied.

The South China Sea is one of the world's most contested areas, mainly because it handles one-third of the world's maritime trade and is considered to be rich in natural resources. Beijing's extensive territorial claims to the sea, which includes islands, banks, reefs, and maritime ways, are challenged by several countries, which have their own claims.

Washington has accused China of building artificial islands in the region and of constructing facilities on the contested islands, voicing concerns that they could be used to restrict free movement and broaden Beijing's strategic reach.

The United States insists that the waters adjacent to China, including reclaimed islands, are still international waters and thus any country can sail its vessels past them. American warplanes and warships have traversed these waters as part of so-called "freedom of navigation" operations to get this point across.

Beijing, in turn, has urged Washington to stop "actions that undermine China's sovereignty and security interests". Yang Jiechi, the country's foreign minister, stressed that China had "indisputable sovereignty" over the region's disputed Spratly Islands and has the right to build civilian and defense facilities on the territory it says it owns.

On top of the political tension, US-China relations with respect to bilateral trade have been patchy too. Earlier this year, Donald Trump hit Chinese imports with crippling levies, claiming that China was stealing US technology and intellectual property.

Despite being engaged in  talks to resolve the spat, Beijing and Washington have exchanged several rounds of trade duties against each other since then.