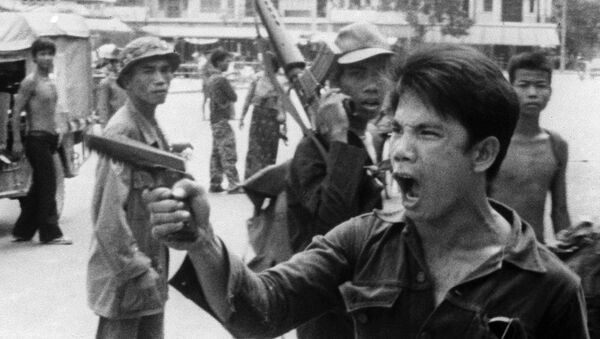 Ilya Tsukanov
All materialsWrite to the author
A high court handed down the landmark ruling on Friday, nearly 40 years after the 1979 Vietnamese invasion which brought the Khmer Rouge's brutal rule to an end.

Samphan, 87, and Chea, 92, are the two most senior living former leaders of the ultra-Maoist group which seized control of the Southeast Asian country in 1975 and proceeded to enact policies which led to the deaths of between 1.6 and 1.8 million Cambodians, or a quarter of the country's population.

The tribunal was the first official acknowledgement that Cambodians were subjected to an orchestrated "auto-genocide" while under Khmer Rouge rule through starvation, overwork and mass executions.

US General Wanted to Nuke Vietnam, Secret Docs Show
Samphan and Chea are already serving life sentences for their role in the forced evacuation of Phnom Penh in April 1975, which the Khmer Rouge carried out as part of an effort to turn the country into an autarkic, pre-industrial, agrarian utopia.

Friday's ruling found the two men guilty of genocide against the minority Cham people and ethnic Vietnamese, along with a litany of other crimes. Samphan and Chea were symbolically sentenced to life in prison, adding to the life sentences they were previously given in 2014.

Around 500 Cambodians, UN representatives, members of the Cambodian government and foreign diplomats were on hand for the verdict, which was read after a lengthy trial which lasted four years.

Tribunal spokesman Neth Pheaktra called the trial "part of the process of providing justice for the victims who were killed during the Democratic Kampuchea regime, as well as for those who survived," and said the pronouncement of the verdict was "a historical event for the Khmer Rouge tribunal, for Cambodia and for the world, as well as for international justice."

The Khmer Rouge Tribunal, officially known as the Extraordinary Chambers in the Courts of Cambodia, was formed in 2006 under an agreement between the UN and the Cambodian government to bring senior Khmer Rouge leaders to justice. To date, three individuals, including Samphan and Chea, have been convicted out of five former Khmer Rouge leaders indicted. Khmer Rouge leader Pol Pot did not live to see the UN-backed trial, dying under house arrest in 1998.

Cambodia and China to Hold Joint Military Exercises for Second Time Ever
The Khmer Rouge were the product of geopolitical and ideological rivalries between the Soviet Union and China. The hardline Maoist Khmer Rouge attacked Soviet embassy personnel during their seizure of power in March 1975, with Moscow breaking off all relations with the regime shortly thereafter. The USSR played an instrumental role in supporting the 1979 invasion of Cambodia by their Vietnamese allies, and helped rebuild the country after it was liberated.

Due to Cold War competition with the Soviet Union, the United States opposed the Vietnamese invasion of Cambodia, slapping Hanoi with sanctions and blocking IMF loans to the country. The US and its allies allowed the Khmer Rouge to retain Cambodia's seat at the UN years after the group was removed from power. Washington also provided covert military assistance to Khmer guerrillas fighting the Vietnamese-backed government, a fact which was conclusively confirmed by WikiLeaks in 2015 with the release of hundreds of thousands of US diplomatic cables from 1978.