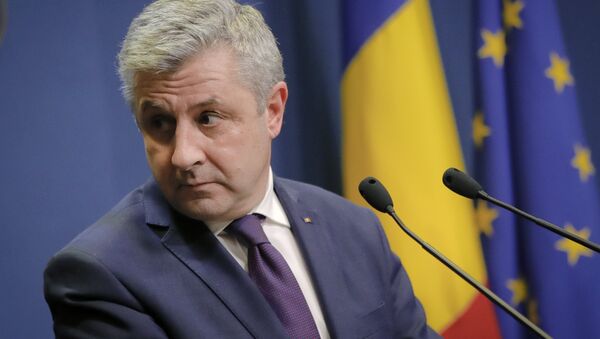 The 'finger' is an internationally recognized gesture of defiance, and a top Romanian politician has gotten his money's worth by showing double middle fingers to 27 countries at once.

Florin Iordache, deputy speaker from Romania's ruling Social Democratic Party, gave a fiery response to the EU's report, which accused the country of backtracking on its efforts to fight corruption and ensure an independent judiciary.

"We'll go on despite all the opposition from the European Commission," Iordache, who leads the parliamentary commission in charge of Romania's disputed justice reform, told the Chamber of Deputies. "We want to be independent, we want to make the decisions according to our constitution and not because of the pressure coming from other quarters."

He then was caught on camera 'flipping double birds' as he stormed off the podium.

The European Commission was highly critical of the progress in judicial reform and fight against corruption in Romania. "I regret that Romania has not only stalled its reform process, but also re-opened and backtracked on issues where progress was made over the past 10 years. It is essential that Romania gets back on track immediately in the fight against corruption and also ensures an independent judiciary," said First Vice-President Frans Timmermans.

The PSD-led coalition government in Romania has undertaken an overhaul of the judicial system, which includes personal changes and amendments to the criminal code. EU institutions, including the Council of Europe and the European Commission, have repeatedly voiced concerns that this reform would affect the quality and independence of the judiciary and ease pressure on crooked politicians.

The European Commission has earlier castigated Poland for its controversial judicial legislation, which gave more powers over judges to the minister of justice, and proposed sanctions against the country.

Brussels has also scolded Hungary's plans to found a new high court to review public administration, claiming that it could ratchet up political pressure on judges.