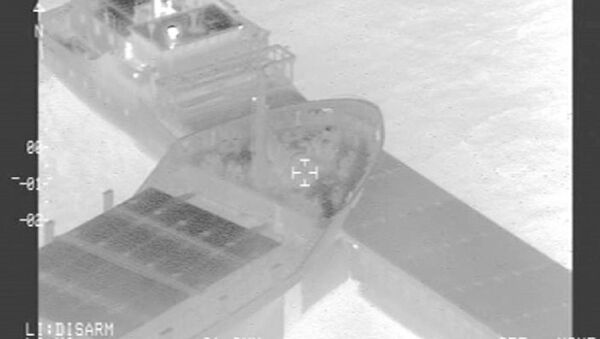 © Photo : havariekommando
Subscribe
Two cargo vessels have collided in the North Sea off the German island of Borkum, the emergency service of the city of Cuxhaven reported on Friday.

​According to German emergency services, the incident occurred Thursday evening, about 25 km northwest of Borkum. The incident involved the Paksoy 1, a 115 meter Turkish-flagged cargo ship with 16 crew members on board, and the Eems Cobalt, an 82 meter Dutch cargo vessel with five crew members onboard. ​The collision is feared to have caused serious damage, creating a hole in the Eems Cobalt's hull and leading to water ingress.

Several German search and rescue ships, tugboats and police boats, as well as anti-contamination boats have been deployed at the scene to pull the ships apart. The sea and airspace within three nautical miles of the collision have been blocked off. No injuries or pollution have been reported.

An amateur recording off a vessel-tracking site appears to show the moment of impact, with the Paksoy 1 shown making an attempt to pull off a rapid 180 degree turn before t-boning the Eems Cobalt.

000000
Popular comments
Huh, the tracking data looks like the Paksoy 1 just missed hitting the Eems Colbalt on the first try and came around for a second pass? Weird.