‘What was the Point of Leaving?’ May’s Brexit Deal Puts UK in Worse Position 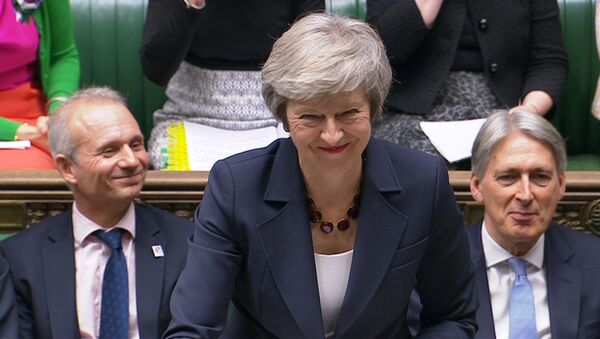 After the results of the closed-door negotiations by UK Prime Minister Theresa May for Brexit became known earlier this week, several cabinet ministers resigned, including Brexit Minister Dominic Raab. Now, it seems the foundations of May’s Conservative minority government are threatened, as is her own job as party chief.

Under Pressure: May Defends Brexit Deal in House of Commons Amid Tories Revolt
Despite the resignation of the UK's Northern Ireland minister, Brexit minister, Conservative Party vice chairman, parliamentary private secretaries (PPS) at the Ministry of Justice and the work and pensions secretary, May announced at a news conference Thursday that the Brexit deal would go ahead, and the the United Kingdom would leave the EU on March 29, 2019. She categorically rejected the prospect of another referendum, Sputnik reported.

Radio Sputnik's Loud and Clear spoke with Alexander Mercouris, editor-in-chief of The Duran, about what this meant for the fate of May and if it raised the possibility of a Labour government.

​Mercouris said the present divide dated back to 2016, and the debate between a "hard" and "soft" Brexit, in which the UK would depart from the political sphere of the European Union completely or retain some sorts of ties to the customs union and free travel zone, respectively. "The problem was that Theresa May never made up her own mind about which of the two she wanted." That, Mercouris said, was why she kept the negotiations so secret that not even her own ministers were part of them.

That's why they "ended up with a deal that nobody wanted," he said, and why things were unraveling so quickly.

Mercouris noted that this is bigger than simply ministers resigning: "There are now concerted moves within the Conservative Party to challenge Theresa May's leadership. If Theresa May faces that kind of challenge, all the talk is that she would now lose it. There is no obvious person to take over from her — that could spell and even greater political crisis, in which the possibility of [Labour Party leader] Jeremy Corbyn stepping in and becoming the next prime minister becomes very real."

The editor said it was possible that ministerial resignations were driven by the smell of "blood in the water," but more likely due to very real anger at the agreement May had signed by "many people in the Conservative Party and… people in Britain generally," a deal which could potentially backfire enormously and has "locked the UK into a customs union with the EU indefinitely, which it cannot leave without the agreement of the EU or that of the Republic of Ireland."

"She has pursued a relentlessly anti-free movement position," Mercouris said, noting that May's "focus has not been on… the economic [issue]. What she always insisted on was that Britain would not remain a member of the customs union, because the regulations of the customs union — the businesses, the directives that govern weights, measures, standards, all the rest — are decided by the European Union and are regulated by the European Court of Justice. She specifically and repeatedly promised that Britain would not remain a part of the customs union, and, in fact, she has now reneged on the promise."

This was only aided by the fact that May committed herself to the cause of a "soft border" between Ireland and Northern Ireland, the latter of which is part of the United Kingdom. So long as she was wedded to this, Britain was doomed to stay in the customs union.

Author: 'Theresa May Has Broken Her Own Election Manifesto Promises'

The end result, Mercouris said, is that the UK would be in a weaker position vis-a-vis Brussels than it was before, because it would lose any voice it had in the EU but remain subject to the Union's dictates.

"If we're going to remain indefinitely in a customs union… with the British economy effectively regulated by the EU, then what was the point of leaving?"

Corbyn's program is very different from this. "He wants to carry out a root-and-branch reform of British society and of the way the British economy functions, and I think he feels and he speaks for a strong tradition within the Labour Party — not one very represented by the parliamentary Labour Party — which says this is not possible within the EU because the EU is very much organized around a neoliberal economic model, which is very much biased toward free market solutions, and that if Britain remains within the EU then it would be very difficult for him to do some of the things that he wants to do without colliding into opposition from the EU and from the European Court of Justice."

"He has a somewhat different position from other people within the Labour Party, but if I may say so, the point about Jeremy Corbyn, and you're absolutely right to say, it would have been unthinkable a few years ago to think of a person like Jeremy Corbyn becoming prime minister. At least he offers clarity, and at least he also offers what, dare I say it, is a sense of direction and a degree of involvement of other people in what he is doing."

That, said Mercouris, is a much preferable course to the chaos following the announcement of May's plan. However, he said he thought that the specter of a Corbyn government was being exaggerated in order to be held over the heads of the Tories by the extremely anti-Corbyn British media.

Corbyn himself, however, has played a shrewd game of both attacking the Conservative government while refusing to adopt a firm position on the issue himself, Mercouris said.