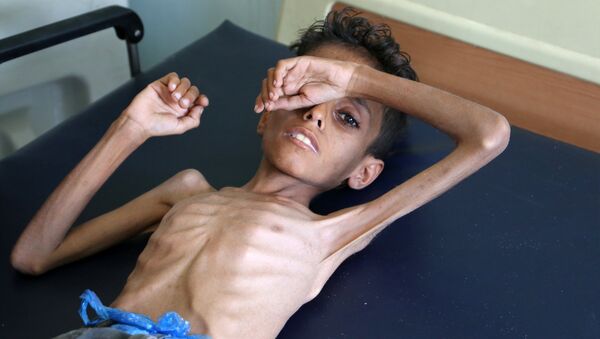 © AFP 2021 / Ahmad AL-BASHA
Subscribe
The resolution’s author and proponents expressed their outrage over the Republican manoeuvre and vowed to continue their efforts to put an end to the United States’ involvement in the armed conflict in Yemen.

Republicans in the US House of Representatives have apparently managed to successfully thwart a bipartisan attempt to cut off all US assistance to Saudi Arabia for the war in Yemen, using a legislative measure on wildlife to achieve their goal.

According to The Intercept, the Republicans carried out the deed by inserting "language that would block a floor vote on whether to direct President Donald Trump to end US involvement in the Saudi- and UAE-led intervention in Yemen" into the Manage Our Wolves Act – a separate bill which will remove grey wolves from the endangered species list.

"It’s unfortunate that the Republicans broke precedent and blocked our resolution to end US involvement in the war in Yemen. They are abdicating congressional oversight duties on their way out of power," Democratic Rep. Ro Khanna, principal author of the anti-war resolution, tweeted.

While today’s vote did not go our way, we will not stop fighting to end U.S. involvement in the worst humanitarian crisis in modern history. We must end U.S. complicity in Yemen’s humanitarian disaster.

​Rep. Eliot Engel (D-NY) also said, as quoted by Vox, that "it’s outrageous and unprecedented that House Republicans are shutting down debate about America’s involvement in the war in Yemen", adding that "it’s wrong for Republicans to stop the House from taking up these critical issues."

UK, France, US Lack ‘Political Courage’ to Pressure Saudis Over Yemen - HRW
Earlier, the Washington Post reported that the Trump administration would end its air refuelling support for Saudi-led coalition warplanes operating in Yemen after President Trump called an August 9 airstrike which hit civilians a "horror show" and accused the coalition of not knowing how to properly use US weapons.

Yemen descended into civil war in late 2014, when the Shiite Houthi militia overthrew the government of President Abdrabbuh Mansur Hadi. Saudi Arabia and a coalition mostly comprised of neighboring Persian Gulf states began operations to try to restore the Hadi government in March 2015.

READ MORE: Trump Accuses Saudi Arabia of Unskillful Use of US Weapons in Yemen

The Saudi-led coalition's conduct in the war, including the blockade of Houthi-controlled ports, has been condemned by the United Nations for causing a humanitarian disaster.

According to UN figures, over 14 million Yemenis are on the verge of famine, approximately half of the pre-war population. Late last year, the UK-based Save the Children organization estimated that 50,000+ Yemeni children had died from starvation in 2017 due to the war.

WhatTheFishIsThis
15 November 2018, 22:46 GMT
000000
USA/UK SAUDIS HAVE EMPATHY FOR EACH OTHERS CRIMES, WHAT A SHAME, BASED ON POLITICAL PARTY DIFFERENCES, SHIAS IRAN INFLUENCE VS SAUDI SUNNI, AND USA UK INTERESTED IN EXPLOITATION, ROBBERY AND CONTROL OF OIL RESOURCES WITH OUT CARING ABOUT COMMITTING GENOCIDE, AND CONTROL OF COUNTRIES TO ENCIRCLE IRAN, ALL IN FAVOR OF THIS CRIMES.