'US Bullying SWIFT Shows How Dysfunctional Financial System Is' – Prof. 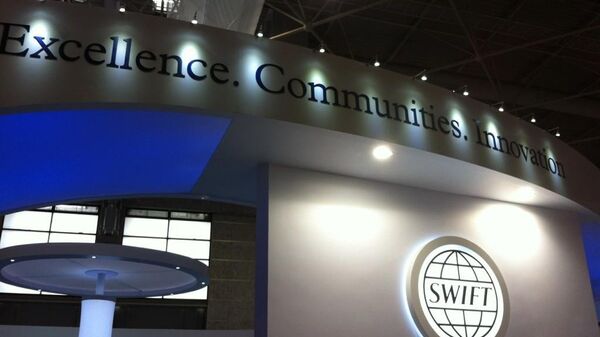 According to US Deputy Treasury Secretary Sigal Mandelker, the Society for Worldwide Interbank Financial Telecommunication (SWIFT) has cut off Iranian financial institutions targeted by US sanctions.

The US Treasury official also said that Washington would be strictly enforcing its sanctions regime against Tehran and announced that there would be "a lot more from the US on Iran."

Sputnik: What's your take on the latest measures taken by the US against Iran?

Steve Keen: I think they're quite extreme, because one thing that we expect is a financial system that works for everyone in the system; even criminals use the financial system. To remove the access of an entire country to international payments is something that no single country should have the power to do. And the fact that the US is bullying the SWIFT system to have them do this is a sign of how dysfunctional an international financial system is.

Sputnik: What kind of impact is it going to have on Iran?

Steve Keen: Quite severe, because Iran's exports are roughly $45 billion per year which is about 10% of their GDP; and 60% of that is actually oil-based exports. Of course, they got to use the SWIFT system to sell that oil if they're going to get paid back in American dollars. That could potentially knock out something on the order of 60% or more of their exports, which would be a drastic hit to the economy and push it deeper  into recession. And also, of course, there are many imported items. They buy a huge range of manufacturing goods, there are a lot of things Iran is importing from other countries which they have to pay for using US dollars, which they do through the SWIFT network. So, it's quite an extreme and severe hit to their economy.

Sputnik: But it was anticipated, wasn't it?

Steve Keen: It was. And that's one of the reasons that Iran has been dealing with a number of other countries that are basically getting fed up with 60 or 70 years of a generally dysfunctional system anyway. The US dollar should never have been used as a reserve currency, there should have been, as Keynes intended, a supranational currency he called the bankor. This, I think, is probably motivating a number of countries to think that 'It's about time we stop complaining about it; it's about time we produced an alternative.' We know that Turkey is working on bringing an alternative currency for its exchanges with major trading partners; China and Russia are talking about the same thing. This may well facilitate what has been necessary for 70 years, which is bringing in a genuine international currency and not using the US dollar for exchange.

Sputnik: But is it going to happen, maybe not now but in some time in the future? Isn't that something that's kind of inevitable?

Steve Keen: It is, but inevitability can take a long time in human relations and this has been delayed for 70 years. I think its time is definitely coming; I hope by the 80th anniversary of Bretton Woods there might be a rival system. And the fact that we already have an Asian collage of central banks working together; the fact that Turkey is working on it now, shows that the pieces are falling into place. It's now a question of getting sufficient agreements globally and then building the system which, quite possibly, will be built through SWIFT itself.

Sputnik: I don't really understand how this works; would this be a very difficult and time consuming process or not?

Steve Keen: It will be difficult to put this altogether because you have to get countries to agree to accept a currency denominated in a basket of currencies in its national exchange. That means that everybody who exports and imports has to agree to accept that rather than accepting the American dollar. So, it's very large in that sense, but once a significant number of countries say that they are going to use it, then it gets a [chance].

Sputnik: What kind of event could actually serve as a trigger to, perhaps, hurry the process on?

Steve Keen: I think it's already happened. The fact that Trump has bullied SWIFT into not letting Iran use the system, it is enough  of a signal to the rest of the world that "if this could be done to Iran by America, it can be done to us by America, and we have to get an alternative."

READ MORE: Hail to the King: Russian Analogue of SWIFT Poised to Eclipse the Original

Sputnik: Can we just go back to Iran and talk about what possible short-term solutions it can come up with now? It has to survive somehow…

Steve Keen: The main short-term solution Iran has is barter trading; they already do a substantial amount of this. They have been under American pressure for almost a decade now, really since the Gulf War occurred. They have been trying to find ways not to depend on the American dollar. So barter arrangements where they might, for example, get soy from another country in return for oil are quite sophisticated. Using techniques like that they can do a round robin of currencies rather than being paid directly in the American dollar. They have got all these various mechanisms already in place; and you can imagine the panic if it were to be underway in Iran right now, now that they can no longer use SWIFT at all. They're prepared but it's still going to have a dramatic impact upon their economy.

Sputnik: Do you have any forecast for the immediate future? What else can we anticipate happening regarding this whole situation?

Steve Keen: I think that we're already seeing a lot of volatility in the oil price, which is hitting international trade quite dramatically; and trying to cut Iran out has initially driven prices up, which is one of the reasons that Trump allowed eight countries not to have to live up to the ban on trading with Iran. That in itself is one of the short-term effects. At the same time, of course, the oil price is affected by the capacity of the shale oil miners in America to export once the price exceeds $50 a barrel; that is now driving the price down. I think that things will get worse rather than better because if Trump realizes the prices aren't going to rise because of the embargo on Iran, then he's going to push the embargo even more. So, we're likely to see declining oil prices, meaning that the countries which have been told they can trade with Iran will now be told they can't trade with Iran; and that will of course raise the high cost even more.