No Bromance in France 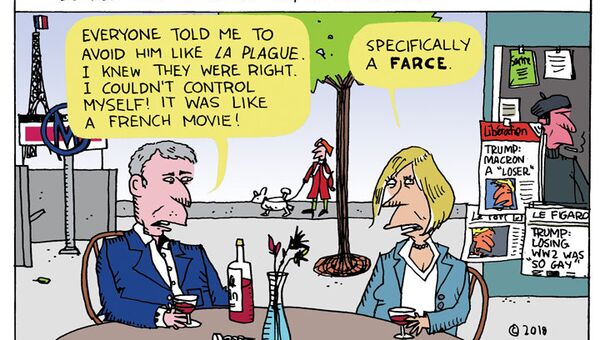 © Sputnik / Ted Rall
Subscribe
International
India
Africa
A weekend of dedication turned into the deterioration of the Trump-Macron bromance after the French president’s comments about the formation of an EU Army were met with scalding tweets from his US counterpart, referencing everything from wine to NATO’s dime.

It may be safe to say and holding and dandruff dustings are a thing of the past between Donald Trump and Emmanuel Macron following a week of disagreements between the two centered around the French president's suggestion of an EU Army.

Trump first came for Macron's and the rest of Europe's checkbooks in a November 10th tweet in reference to the EU Army versus NATO. Not sure if he drove his point home, the US president continued to keep his foot on Europe's neck three days later in a terribly distasteful tweet referencing both WWI and WWII.

"Emmanuel Macron suggests building its own army to protect Europe against the U.S., China and Russia. But it was Germany in World Wars One & Two — How did that work out for France? They were starting to learn German in Paris before the U.S. came along. Pay for NATO or not!"

However, it didn't stop there. Trump went on to talk about France's wine exports and even remixed his campaign slogan to say "MAKE FRANCE GREAT AGAIN." With all this, it's a surprise Lady Marmalade wasn't brought into the mix!