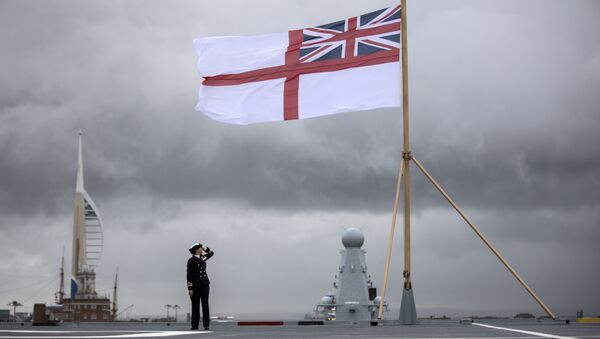 The last time Britain's Royal Navy was this small was 1650. Sputnik spoke to Iain Ballantyne, editor of the global naval news magazine Warships International Fleet Review, about how Britain lost its mantle as the world's greatest sea power.

The Royal Navy was represented at the Cenotaph in London on Sunday, November 11, at ceremonies to mark the 100th anniversary of the First World War.

In 1918, after defeating and capturing the German fleet, Britain was the undeniable master of the world's seas. It had a total of 1,261 ships — ranging from battleships to patrol boats.

But, apart from a brief recovery during the Second World War, it has been a long and steep decline ever since and the Royal Navy is now a fraction of the size it was even in 1991, at the end of the Cold War.

Iain Ballantyne, naval historian and editor of the global naval news magazine Warships International Fleet Review, said all navies were inevitably much larger during wartime but the Royal Navy has not been this small since the 17th century.

The Royal Navy would like to say Thank You to all those who served and sacrificed to help change our world 100 years ago. #ThankYou100 #PoppyAppeal @PoppyLegion https://t.co/i6xgypUYlg pic.twitter.com/a7XI1Khb4L

"In 1917 the British had 339 destroyers, which had to do all manner of duties, including protecting the Grand Fleet and convoys," Mr. Ballantyne told Sputnik.

Now the Royal Navy only has six destroyers, all of the Type 45 class.

But Mr. Ballantyne said it was impossible to compare a First World destroyer with a modern Type 45 destroyer.

THREAD: Since 1969 @Royal Navy has always had at least one ballistic missile-armed, nuclear powered submarine at sea, the ultimate guarantor of national security. pic.twitter.com/PJYwFPLJot

"It is not a meaningful comparison — it's like trying to compare a Ford Model T with a Porsche. You can only really compare the Royal Navy of today with the navies of other nations today. Less sophisticated vessels can pull off victories over more cutting edge ships, but the circumstances would have to dramatically disadvantage a modern warship like the Type 45," Mr. Ballantyne told Sputnik. 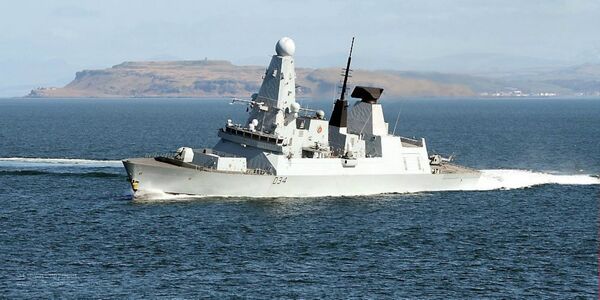 "Today the Royal Navy is a third of the size it was in 1991 at the end of the Cold War and in the past 15 years its frigate and destroyer numbers have declined from 32 to 19. Originally 12 Type 45 destroyers were intended to replace 12 Type 42 destroyers but the Labour government of the time decided to cut this back by half," Mr. Ballantyne told Sputnik.

"These ships are in many ways immensely more capable then predecessors — especially in air defence against aircraft and missiles — but they are not exploited fully in terms of weaponry that could be fitted, and a single warship can only even be in one place not matter how sophisticated. And when a T45 suffers from power plant problems — as they notoriously have in recent times — then their availability can become extremely limited, though in 2018 big efforts were made to get more of them back to sea," Mr. Ballantyne told Sputnik.

In June 1919 the German battle fleet, which had been surrendered after the Armistice, was scuttled by its crews at its moorings in Scapa Flow, in Scotland as "a final act of defiance", said Mr. Ballantyne.

"German U-boats, which had done more to bring the Allies to brink of defeat than the Kaiser's battleships, were surrendered at Harwich in late 1918 and early 1919 and their crews sent home immediately — all 176 surrendered U-boats had been scrapped by Britain and her allies within a few years," Mr. Ballantyne told Sputnik.

So when exactly did the Royal Navy lose its crown as the king of the seas?

"The rapid decline of the Royal Navy was inevitable after World War One, as it had been such a massively powerful force with more battleships that its rivals combined, and after the war needed to draw down to save money — but it remained the foremost naval force in the world until World War Two when it was seriously challenged by the Germans and Japanese, but held the line, being replaced as the world's leading navy by the US Navy by about 1943," Mr. Ballantyne told Sputnik.

"The Royal Navy remained second only to the US Navy in size, power, full spectrum capability and war experience until the late 1990s," he added.

But will the US Navy retain its seapower for the foreseeable future.

21 Oct 1805: Admiral Horatio Lord Nelson is killed at the moment of his greatest victory at the Battle of Trafalgar, establishing the dominance of British sea power for a century.#OTD #OnThisDay pic.twitter.com/jzV8q9wyYU

"The US Navy is undoubtedly the most powerful fleet in the world and occupies the same place today as the Royal Navy did between 1914 and 1918 — the undoubted master of the seven seas — with massive power spread across the globe. No other fleet comes close in terms of conventional fire power or reach, though in different regions of the world it is being challenged. The Chinese are building a large fleet to challenge US maritime domination in Indo-Asia-Pacific," Mr. Ballantyne told Sputnik.

"Russia, which still fields a highly capable, if small, submarine force compared to the USA's, is also set on laying down the gauntlet to the USA and its allies at sea in the Med and Atlantic, though it does not have the economic power of China or even the UK or other NATO members so it will inevitably lag behind in surface ships terms. Russia's surface fleet pales in comparison to the one Beijing is building, which in numbers and rapidly evolving capabilities looks set to outclass everyone else except the USA," Mr. Ballantyne told Sputnik.

What's Left of the Fleet?

So how many "capital ships" has the Royal Navy got left?

Your countrymen underperformed @thinkdefence —"six British sailors were taken into custody on mostly drunk and disorderly charges,… The sailor who wouldn’t put his hands behind his back had to be stunned with a Taser before he was arrested, Smith said." https://t.co/C4lG3woIoe

"But if you compare the Royal Navy to other western European fleets, then the nearest comparative navy is that of France, while the Russian Navy in reality struggles to have a similar number of vessels to the Royal Navy available at any one time for front line missions. That does not mean the Russian Navy should ever be underestimated as it certainly seems determined to make its presence felt under, on and over the sea," Mr. Ballantyne told Sputnik.