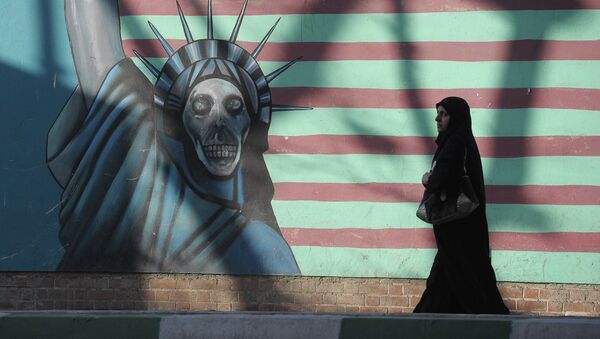 © Sputnik / Grigoriy Sysoev
/
Go to the mediabank
Subscribe
International
India
Africa
The US imposed sanctions against Tehran's energy, banking and shipping sectors on November 5 following Washington's unilateral withdrawal from the Iran nuclear deal. The European Union slammed the decision and vowed to safeguard's Iran's access to the global oil market with a backup payment mechanism. However, no country seems willing to host it.

In an attempt to save what was left of the 2015 Joint Comprehensive Plan of Action, its signatories Germany, France and the UK, as well as the EU government in Brussels are reportedly poised to press Luxembourg to host the non-dollar Special Purpose Vehicle (SPV), a financial entity which is designed to facilitate trade between European companies and Iran amid US sanctions.

EU foreign policy chief Federica Mogherini asked several states to host the mechanism. A European diplomat, however, told Reuters that “no one has come forward at this stage.” The host country, Reuters explains, risks putting its local banks at risk in implementing the SPV, incurring punishment from the US.

Earlier, Austria refused to play this role, pointing out that there are “too many open questions and imponderables with this SPV." Luxembourg, home to the EU Court of Justice and Belgium, which  were each viewed as a possible SVP host country. Both of them expressed their reservations about playing this role, fearing that Washington may cut local lenders’ access to the US market, Reuters reports, citing an unnamed EU diplomat.

"If we don't have a host country, we have a very big problem. So much is riding on this that some way will need for someone to host this. There is a lot of nervousness about what hosting an SPV means," another diplomat told the agency.

However, the bloc refuses to give up.

"It's not dead, but it's not going in the right direction. We are going to try again with Luxembourg, but we're under no illusions," a European diplomat said.

According to European Justice Commissioner Vera Jourova, the technical work continues as the bloc aspires to find a solution for keeping the trade with the Islamic Republic and withstanding US pressure.

"We Europeans cannot accept that a foreign power, not even our closest friend and ally, takes decisions over our legitimate trade with another country," she told the EU lawmakers.

The Trump administration announced plans to reinstate the sanctions against Tehran, which were previously lifted under the 2015 Iran nuclear deal, in May. The latest set of sanctions, which came into force on November 5, affects the country's energy, banking and shipping spheres. The international financial messaging network SWIFT has already declared that it has cut off communication with "certain Iranian banks".

US National Security Adviser John Bolton promised that Washington will exert even more pressure on Tehran. He promised to “squeeze them [Iran] until the pips squeak." He also lambasted the EU's attempts to overcome the US sanctions and insisted that over time, Europe will come to accept the fact that it can no longer do business with Tehran.