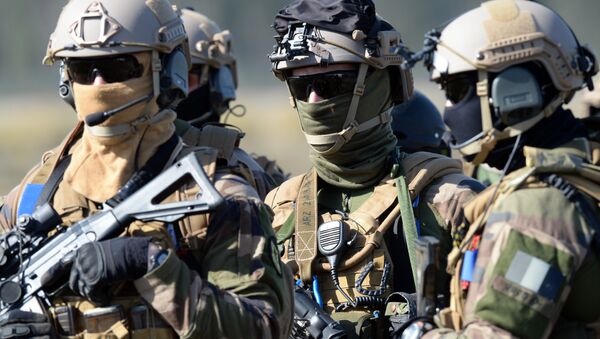 BRUSSELS (Sputnik) - The European Commission recalled that the idea of creating an EU army was put forward by President Jean-Claude Juncker four years ago, and welcomed the fact that it had recently been actively supported by France and Germany.

In early November, French President Emmanuel Macron called for the establishment of a European army that would be independent of the United States, stressing that France had recently faced multiple attempts by outside forces to meddle in its domestic affairs and cybersecurity. In particular, the French president mentioned threats allegedly coming from China, Russia, and the United States. On Tuesday, German Chancellor Angela Merkel voiced her support for the idea, adding that "the times when we could rely on others are over."

"Let me clarify that the first one who spoke of the EU army four years ago was someone called Jean-Claude Juncker. Memory is short nowadays in Brussels and in the capitals … So now I am reading about it as a Franco-German agreement," the spokesman for the commission, Margaritis Schinas, said on Wednesday.

World Needs Peace-Seeking Statesmen, Not a ‘European Army’ - Journalist
The official, however, stressed that "we are delighted" that both Paris and Berlin, with a few days interval, publicly backed the idea.

"We have many times explained how we see these things. This is the commission that wants Europe to have a meaningful defence identity … We have proposed a significant increase of EU resources for defence in the multiannual financing framework. We have so much work and so much activity, and we are delighted that the political atmospherics around this work seems to be right and is going in our direction," Schinas added.

The European Union and NATO share a majority of their members. Nevertheless, European countries are also seeking to strengthen their defence cooperation within the European Union.

In December, EU member states, except for Denmark, Malta, and the United Kingdom, adopted a decision establishing the Permanent Structured Cooperation (PESCO). The countries agreed on the list of 17 projects to be undertaken under PESCO, including training, capability development, and operational defence readiness.

This summer, the European Commission proposed increasing investment in security by 40 percent in the 2021-2027 budget. The bloc also endorsed the new European Defence Industrial Development Programme (EDIDP), aimed at funding the development of new and upgraded products and technologies. The program will be launched as part of the EU Defense Fund, set up in 2017 to coordinate EU nations' investments in defence, research and acquisition of new military technologies and equipment.