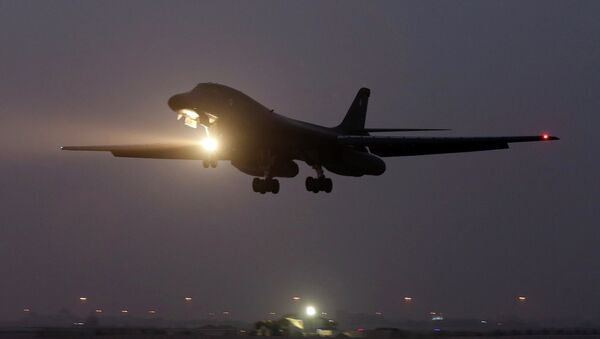 WASHINGTON (Sputnik) - US Secretary of State Mike Pompeo and Qatari Deputy Prime Minister Khalid Al-Attiyah met in Washington to discuss the Trump administration's proposal to create an Arab security alliance, the State Department said in a press release on Wednesday.

President Donald Trump's administration has proposed creating the Middle East Strategic Alliance, an Arab security pact widely referred to as an "Arab NATO," made up of the six Arab states of the GCC along with Egypt and Jordan.

The goal of creating such an alliance of Sunni Arab states would be to counter the growing influence of Iran in the Middle East, US officials have said. Similar US initiatives to establish a collective Arab security pact have failed in the past.

The Trump administration's efforts to create the alliance have been hampered by an ongoing rift between Qatar and the other Arab states in the GCC. In June 2017, GCC members Saudi Arabia, the United Arab Emirates and Bahrain, along with Egypt, severed diplomatic relations with Qatar, accusing the country of supporting terrorism. Qatar has firmly denied the accusations.

During their talks in Washington, Pompeo and Attiyah also discussed regional security and stability, bilateral ties and other mutual interests in the region, as well as the upcoming US-Qatar Strategic Dialogue, the release said.

The two officials also spoke about an ongoing project to expand Qatar's Al-Udeid Airbase, the largest military facility used by US forces in the Gulf region. The project to expand the base, which hosts more than 10,000 US and coalition forces, was launched in July.

The military base is home to the US Air Force Central Command (AFCENT) and serves as major communications and operational centre for the coalition fighting against the Daesh* terrorist group in the region.

*Daesh, also known as ISIS, Islamic State, is a terrorist group, banned in Russia and many other countries.