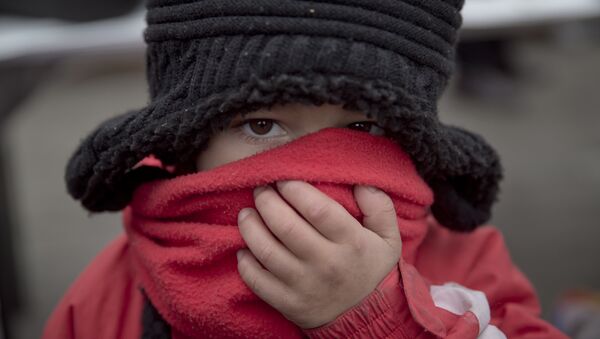 © AP Photo / Vadim Ghirda
Subscribe
International
India
Africa
Ministers are set to draft in a commissioner to oversee children’s services in the crisis-hit Northamptonshire county council following a damning report from Ofsted inspectors highlighting alarming shortcomings. Sputnik spoke to Bernard Gallagher, Reader in Social Work and Applied Social Sciences at the University of Huddersfield about it.

Sputnik: How significant is it that ministers are drafting in commissioners to oversee failing children services?

Bernard Gallagher: I think it's very significant because it seems to indicate that something is seriously wrong with the delivery of services to a group of very vulnerable children, these children are vulnerable already, so obviously it is essential that they require a high level of service.

Sputnik: Where does the responsibility lie? Is it solely down to the current government or is this more of a locally failing?

UK Chancellor Raises Brexit Funding to $2.5 Billion, Claims Austerity's No More
Bernard Gallagher: I think a lot of these situations are quite complex and there will be a lot of factors involved but first and foremost; yes, the management of Northamptonshire local authority is not good enough.

Clearly this needs to be addressed and something needs to be done about it and maybe bringing this commissioner will help but another major factor is first of all the tremendous difficulty social workers face in doing their jobs, but on top we've had austerity measures for ten years now which is clearly making the jobs of social workers and local authorities more generally much more difficult. The government nationally does have a responsibility also.

Sputnik: What policies should we be seeing from the government in order that this trend does not continue?

Bernard Gallagher: I think in a nut shell the government has to review its policy on austerity and Theresa May, the Prime Minister has suggested that she might be doing that anyway, I mean she might be doing it for political purposes but the fact of the matter is that authorities up and down the country need more money.

It's interesting because the figures seem to show that the number of social workers hasn't changed very much during this period of austerity but the wider conditions that they are working in have become much more difficult and that puts children at risk.