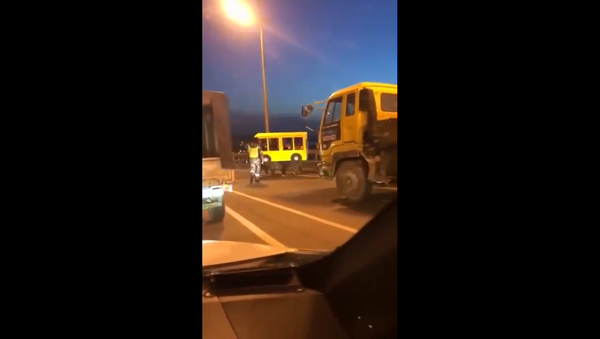 Four creative individuals wanting to cross the car-only Zolotoy Bridge in Vladivostok, Russia, came up with a novel idea to get across the cable-stayed overpass - become a human-powered bus. (Think Fred Flintstone's car.)

Recently surfaced footage shows the quartet inside a makeshift cardboard bus, attempting to maintain their disguise while trying to merge into the left traffic lane. Their plan would've worked if it hadn't been for that meddling security guard who ultimately forced the group to make an illegal U-turn back to safety.

​Although it's unclear whether or not the group suffered any punishment for their actions, they certainly managed to win over the hearts of many who found their efforts valiant, including that of the woman who managed to capture the incident on film.

"Where did they come from?" the filmer can be heard saying, The Moscow Times reported. "This is beautiful; it's art. "

As the group is ushered away from the traffic, the woman adds, "Why are they kicking them out?"

Netizens had their own opinions on the foiled plot.

​According to the Times, the bridge was built in preparation for the 2012 Asia-Pacific Economic Cooperation summit and was later closed to pedestrians in 2015 after inspections concluded that the pathway was too narrow and failed to meet anti-terrorism regulations.

Prior to the 2015 closure, the bridge was also the site of three suicides and one suicide attempt, RT reported. Although residents have called on officials to lift the restriction, as it's much faster to walk the bridge than drive and wait for traffic, the walking ban has stayed in place.

In related Flintmobile-like news, law enforcement officials in Florida pretended to pull over a Fred Flintstone impersonator for speeding after catching him in a decked out Smart Car that was meant to look like that Flintstones' family vehicle.