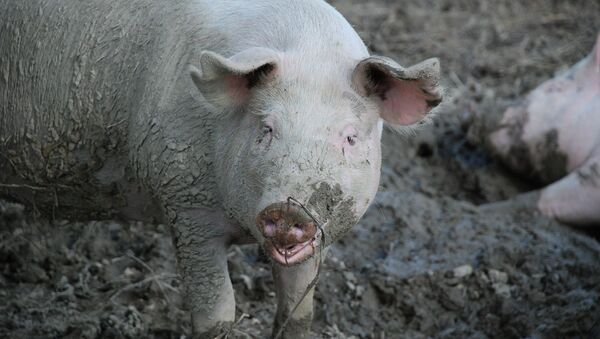 Even a limited outbreak of swine pest, a highly contagious disease common in pigs, could cost the Scandinavian nation $240 million, veterinarians said.

Behind the scenes of Trident Juncture 18, the largest NATO drill on Norwegian soil since the 1980s, frantic work to prevent the spread of the feared disease was underway, the daily newspaper Dagbladet reported.

The alarm went off after a foreign soldier was found to be in possession of prohibited bacon bits he had taken from his home country, where the disease is raging.

Following the revelation, a team of hand-picked veterinarians and specialists from the Norwegian Food Safety Authority worked day and night to ensure that Norway is not affected by African swine pest, a highly contagious disease common in pigs. While it doesn't affect humans, swine pest (also known as swine fever or ASFV) may have devastating consequences for a nation's economy.

"Just to illustrate how important controls are, a limited outbreak of African swine pest alone could cost our country NOK 2 billion ($240 million). Unfortunately, there are a number of examples, such as in Moldova, where pork production disappeared after an outbreak," Colonel Per Leines Lausund told Dagbladet.

As Norwegian Armed Forces veterinary inspector, Lausund became the leader of the 45-strong expert team who have been hunting down all possible sources of infection during the NATO drill. All in all, over 10,000 vehicles have been inspected.

"I do not want to reveal the nationality of the soldier who brought two pieces of bacon from his country with African swine fever," Lausund said.

Karen Johanne Baalsrud of the Norwegian Food Safety Authority stressed that illegal products from non-EU countries, including meat, milk and eggs, were found during a joint inspection at Bodø Airport prior to the start of the drill.

While all the confiscated and thoroughly scrutinized foods tested negative, the nervousness over exposure to swine pest put Norwegian forces to test during recent drills in Lithuania, where the disease was previously found. Before the gear and the crew could return back to Norway, all clothing and vehicles were disinfected.

Earlier, outbreaks of the swine pest have occurred in many countries, including in Africa, South America and Europe (Portugal, France, Malta, Belgium and the Netherlands, to name a few). Recently, the disease has spread to the Baltics and the Balkans.

Numbering 50,000 soldiers from over 30 countries, the Cold War-style Trident Juncture drill was the largest of its kind in decades, sparking condemnation from the Russian authorities and protests from Norwegian anti-war activists.

Despite accolades from high-ranking officials, the exercise was marred by a series of mishaps involving military vehicle collisions, soldiers pub-crawling and defecating in public places and complaints from locals over fields destroyed by heavy military vehicles. The drill left a bitter aftertaste for the Norwegian Navy, which lost an expensive frigate in a hard-to-explain collision with a tanker.