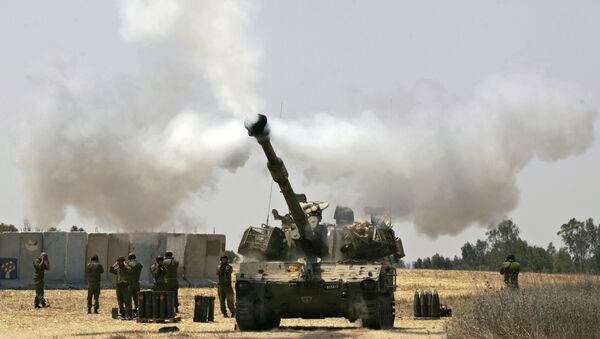 Shortly after the sides agreed on the ceasefire, which prompted the resignation of Israel's Defence Minister, reports about victims of the IDF attack have appeared in Israeli and Palestinian media. The IDF has not confirmed the reports yet.

A fisherman in Gaza was killed by IDF fire on November 14, according to Israeli and Palestinian media reports.

The day before the attack, both sides agreed on a ceasefire, prompting Israeli Defence Minister Avigdor Lieberman to tender his resignation.

The ceasefire ended the intense exchange of missiles and shelling. The Israeli military reported about 460 rocket launches by Palestinian militants from the Gaza Strip on November 13. As the Israeli army specified, they had intercepted over a hundred of the projectiles.

IDF Planes Launch Strikes in Gaza After Israeli Bus Hit by Mortar Fire (VIDEO)
Israeli Defence Minister Avigdor Lieberman has refused to support the government's decision to cease hostilities with Gaza militants, criticizing it as a "capitulation to terrorism" and announcing his resignation.

The Israeli air force bombed targets all over the enclave in response to dozens of rocket attacks launched by Palestinian militants, who described the move as revenge for seven militants killed on November 11 during an Israeli special forces operation.