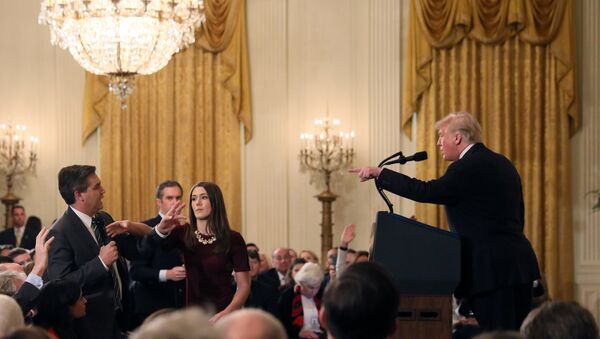 "Fox News supports CNN in its legal effort to regain its White House reporter's press credential. We intend to file an amicus brief with the U.S. District Court. Secret Service passes for working White House journalists should never be weaponized. While we don't condone the growing antagonistic tone by both the president and the press at recent media avails, we do support a free press, access and open exchanges for the American people," Fox News President Jay Wallace said in an official statement.

Shortly after, more than a dozen news outlets and journalism organizations filed friend-of-the-court briefs in support of CNN's lawsuit.

"Our news organizations support the fundamental constitutional right to question this President, or any President," Fox, NBC, the Press Freedom Defense Fund, The New York Times and others said in the statement. "We will be filing friend-of-the-court briefs to support CNN's and Jim Acosta's lawsuit based on these principles."

The media statements refer to the federal lawsuit against the Trump administration, filed by CNN on Tuesday. The company demanded the White House to restore the press credential of reporter Jim Acosta. The correspondent has lost his "hard pass" to the administration after he broke protocol and refused to surrender his microphone during a press conference with US President Donald Trump last week, following the midterm congressional elections.

Commenting on the lawsuit, White House Press Secretary Sarah Sanders called the move "more grandstanding from CNN", noting that other company's reporters were still allowed to enter the administration's premises. As she remarked, Acosta was "no more or less special than any other media outlet or reporter with respect to the First Amendment".