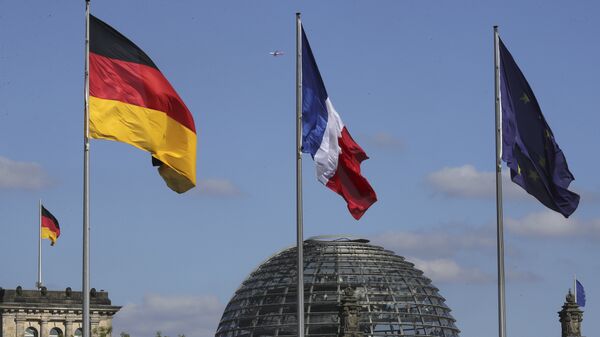 The German economy posts a contraction for the past quarter amidst the elevated political uncertainty in the euro area and Germany itself, whilst economic headwinds facing the nation included Brexit-related concerns and the threat of disruptions in international trade.

Kristian Rouz — Official data suggests Germany's economic growth declined in the third quarter for the first time since 2015, as the elevated risks of a debt crisis in Italy, Brexit-related uncertainty, and the looming disruptions in international trade have all taken their toll on Europe's powerhouse economy.

China's GDP Growth in Q3 2018 Lowers to 6.5% Amid Trade Row With US
According to Germany's Federal Statistics Office, the nation's GDP posted a quarterly contraction of 0.2 percent in 3Q18 — compared to the previously expected 0.1-percent decline. However, Germany's annual economic growth came in positive at 1.1 percent, but still believe the previous expectations of a 1.3-percent expansion.

The data has stirred speculation that Britain might be better off economically, given that the UK's quarterly GDP increased by a 0.6-percent in the third quarter despite the tumultuous divorce process with the EU.

But Germany is facing heightened risks to its exports in manufactured goods — the main driver of the continent's biggest economy.

"The slight decline in GDP compared to the previous quarter was mainly due to foreign trade developments: provisional calculations show there were fewer exports but more imports in the third quarter than in the second," the German government said in its report.

Meantime, the Eurozone's common currency has recently been rattled by the rising fiscal uncertainty in Italy, accompanied by a political standoff between Rome and Brussels. The European Commission has urged Italy to review its proposed budget for 2019 and take effort to narrow its budget deficits.
However, Italy's populist government has been reluctant to comply.

READ MORE: Hammond to Warn That Canada-Style Deal With EU Would Cost Up to 10% of GDP

These tensions fuelled anxiety amongst European investors, with spill overs affecting Germany as well. The ongoing financial and political instability across the Eurozone has also dampened the fourth-quarter outlook for the German economy as well.

According to Germany's ZEW research institute, investors do not believe the German economy will quickly rebound after the third-quarter contraction. ZEW experts cited a longer-term weakness in Germany's GDP, which is largely driven by the nation's exports, including to other EU member-states.

"The figures for industrial production, retail sales and foreign trade in Germany all point towards a weak development of the German economy in the third quarter", Achim Wambach, ZEW president, said.

IMF Raises Russia's 2019 GDP Growth Projections to 1.8% - Report
Meanwhile, Germany is also facing a rising political instability at home, where the ruling coalition of Chancellor Angela Merkel has been on the verge of a breakup over the past few months. The German states of Bavaria and Hesse recently held elections, which proved disastrous for Merkel's Christian Democrats — giving advantage to the Greens and the populist Alternative for Germany.

This gradual change in German voter preferences might signal a change in the nation's economic policies as well — along with Berlin's possible change in attitude towards the EU.

In the wake of these developments, the German government has downgraded its GDO growth outlook for this year from 2.3 percent to just 1.6 percent.

This is due to "a less favourable foreign trade environment, temporary production issues and capacity bottlenecks are slowing the pace of expansion", the German government said.

Still, the German pace of economic expansion was 2.2 percent for 2017, its strongest in six years — meaning this year's slowdown could eventually prove temporary. Experts say once the Brexit uncertainty is finally settled in April 2019, and Italy's debt woes are resolved, the German economy might gain momentum again.
However, the upcoming two-quarters might see the German economy extend its quarterly losses, and a gradual deceleration in the annual pace of GDP growth.