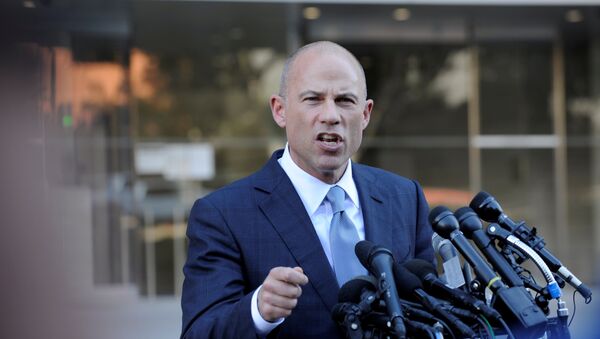 Michael Avenatti, a high-profile lawyer for adult film actress Stormy Daniels in her lawsuit against US President Donald Trump, was arrested on Wednesday. Initially, TMZ reported that he was booked on suspicion of domestic violence, but Avenatti's wife has claimed otherwise.

Avenatti has made a name for himself in the past year or so for representing Stormy Daniels, an adult film actress who claims she was paid hush money by former Trump lawyer Michael Cohen to keep quiet about her affair with the president. He has also represented a woman who accused then-nominee for the Supreme Court Brett Kavanaugh of having participated in a "gang bang" of her, and also recently announced litigation against Fox News host Tucker Carlson, accusing him of assault. Carlson had previously used the title "Creepy porn lawyer" to refer to Avenatti when he was a guest on his show.

Avenatti is also a favorite of the anti-Trump resistance as a contender for the Democratic nomination for the 2020 presidential election. Avenatti was in the custody of the Los Angeles Police Department on Wednesday.

It was originally reported by TMZ that Avenatti's wife, who is estranged, was left "swollen and bruised" in the face. TMZ first broke the story of the arrest before Buzzfeed News confirmed Avenatti was in jail.

However, CNN reporter MJ Lee posted on Twitter that she had spoken to Lisa Storie-Avenatti, who denied that she was hit. "I haven't seen Michael in months," she said adding that "there has never been domestic violence" in her relationship with him.

TMZ has updated its story saying that they "now know" that the woman whose encounter with Avenatti they detailed was not his wife.

According to the TMZ law enforcement sources, Avenatti assaulted the woman on Tuesday but on Wednesday after she returned to pick up her belongings, an argument brought the woman outside where she was spotted in sunglasses and yelling "I can't believe you did this to me" over the phone.

Avenatti reportedly showed up inside the building after his wife was brought in by security. He reportedly screamed "she hit me first," and "this is bulls**t, this is f***king bulls**t."