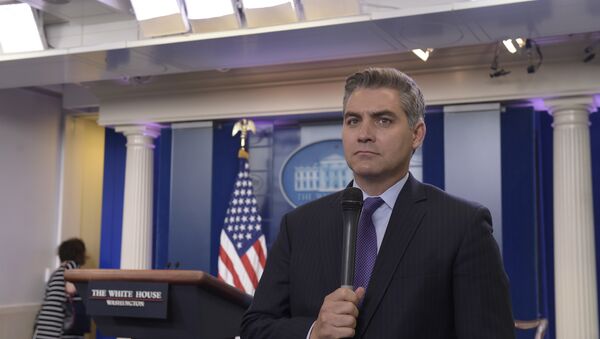 When answering the question on the CNN's lawsuit against Trump's administration, White House Press Secretary Sarah Sanders noted that CNN has nearly 50 other pass holders and that "Acosta is no more or less special than any other media outlet or reporter with respect to the First Amendment."

The spokesperson went on declaring that the White House would defend against the lawsuit.

"We have been advised that CNN has filed a complaint challenging the suspension of Jim Acosta's hard pass. This is just more grandstanding from CNN, and we will vigorously defend against this lawsuit," Sanders said.

The comment referred to the CNN's statement made earlier in the day, saying that the company had filed a lawsuit against the Trump administration to demand the restoration of White House correspondent Jim Acosta's press credentials.

"CNN filed a lawsuit against the Trump Administration this morning in DC District Court," the statement said. "It demands the return of the White House credentials of CNN’s Chief White House correspondent, Jim Acosta."

The news network argued that taking Acosta's credentials is a violation of the First Amendment of the US Constitution, which guarantees freedom of the press.

While the network seeks "permanent relief," it is asking the court to issue a restraining order that would require the White House to return Acosta's press pass.

The White House suspended Acosta's credentials on Wednesday after he engaged in a heated exchange with President Donald Trump during a press conference.

During Thursday's press conference, Acosta aggressively questioned Trump. When the US president tried to move on to other reporters, Acosta continued to press for answers, prompting a heated argument. Eventually, a White House intern took the microphone away from Acosta. Trump called the journalist a "rude terrible person" and accused his network CNN of reporting "fake news."

White House Press Secretary Sarah Sanders later said on Twitter that Acosta had been "placing hands" on the intern who removed the microphone from his hand. Sanders said she would revoke Acosta's White House pass. Sanders also tweeted a video of the purported incident.

But Research Director of the Tow Center for Digital Journalism at Columbia University Jonathan Albright and other observers later said the video, which was first shared by the conspiracy theory website InfoWars, was likely edited to make Acosta appear more aggressive than he actually was.

The decision to revoke Acosta's credentials drew a fierce backlash from the journalistic community. The White House Correspondents Association called on the White House to "immediately reverse this weak and misguided action." The organization also said that Sarah Sanders had "lied" about Acosta's actions.