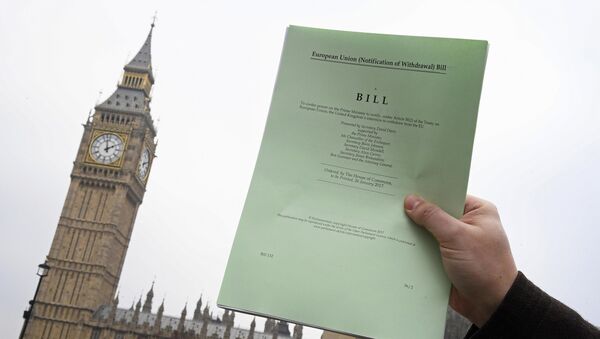 UK Prime Minister Theresa May said earlier in the day that Brexit negotiations were "in the endgame," adding, however, that there were still “significant” issues, as the sides couldn't agree on the Northern Irish border, The Guardian reported.

A UK government source told journalists that London and Brussels had agreed on a withdrawal deal text that came amid reports that the envoys of EU countries had been summoned to a Brexit meeting set to take place on Wednesday evening. Later the Downing Street confirmed that information.

The UK Prime Minister's office also confirmed that Theresa May would be conducting a cabinet meeting t 14:00 on Wednesday.

A spokesman for the Irish foreign minister said that the talks were still ongoing, adding that they would not comment on the further leaks in the media.

Last week, May's spokesman stated that there was a "good progress" in the UK-EU talks on London's withdrawal from the bloc and 95 per cent of the future Brexit agreement had already been settled.

Reaction to the Agreement

Addressing the deal, ex-Foreign Secretary Boris Johnson stated that the agreement is "vassal state stuff" and said he would vote against the deal.

Conservative lawmaker Jacob Rees-Mogg said that Brexit plan should be blocked, as it"does not deliver on the vote of the British people."

"I hope the cabinet will block it and if not I hope parliament will block it. I think what we know of this deal is deeply unsatisfactory," Rees-Mogg told the BBC.

He also stated that according to the leaked deal, Northern Ireland would be under more control from Dublin, then from British Belfast.