Tommy Sheridan
All materials
My task on Saturday was to address my political party’s annual conference and try to inspire the gathering with some socialist vision and ideas. The name of the party is Solidarity and it was formed in late 2006 out of a messy battle within a bigger party that I used to lead and represent in Parliament.

Over the past eleven years it has been hard to maintain a left party committed to independence in the face of a rampant SNP that has adopted many policies formerly associated with left and socialist parties while being best positioned as the de facto political leadership of the mass grassroots independence movement.

The rise of the SNP has been spectacular over that period. From securing the right to form a minority Scottish Government in 2007 for the first time to the incredible outcome of 2011 when against all predictions, and confounding the complex intricacies of the more proportional Regional List and Constituency voting system, they won an outright majority which was truly ‘historic' and ‘emphatic,' even according to arch unionists like former Tory PM David Cameron.

Scottish Court Rules UK Can't Stop Brexit Case Going to ECJ - Lawyer
On the back of the politicisation of Scotland during the Independence Referendum of September 2014 the SNP's meteoric rise continued in the May 2015 General Election when they secured 56 of Scotland's 59 Westminster seats and actually won more than 50% of all votes cast in that election.

In 2016 the SNP hierarchy and army of loyal online supporters ignored sound advice from people like me on the best way to use the unique Scottish Parliament voting system. Due to their dominance in the constituencies across Scotland, I humbly suggested YES supporters give their First Constituency vote to the SNP but their 2nd Regional List vote to one of the other progressive pro-independence parties that were standing, namely Solidarity, The Greens or a group called RISE.

This would maximise the number of YES supporters elected to the Parliament and minimise the presence of unionists. It became a discussion about the two different coloured ballot papers (peach and lilac) that would be issued at each polling station and the importance of tactics in how to use them.

What is It With Theresa May?
Sadly my voice and those of others was ignored on this question and the opportunity for an even greater pro-independence majority in the Scottish Holyrood Parliament was missed. Instead almost every List (2nd) vote cast for the SNP amounted to a wasted vote. They attracted 953,587 List votes but won only 4 List seats while the 524,222 List votes for the Tories secured them 24 seats.

Ironically enough the Tories have always opposed the more proportional voting system used for Holyrood elections yet without it they would be a mere rump in the Parliament with only 7 Constituency seats. Frustratingly for the YES City of Glasgow we have only one Regional List MSP representing us and six unionists (4 Labour & 2 Tories) because the SNP and its supporters ignored the warnings. 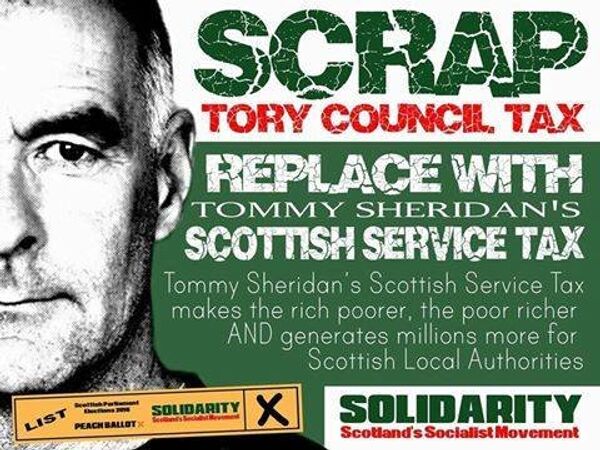 Solidarity is More Than Name of Political Party – It is a Way of Life
© Photo : Tommy Sheridan

Some of the numpties elected to represent the Tories are not fit for purpose but every one of the 111,101 Regional List votes cast for the SNP were completely wasted. A slight re-distribution of those votes could have boosted Glasgow's YES representation from one to three or four but the warnings prior to the election were dismissed and sadly ignored.

UK Food Safety Could See 'Huge Decline' After US-UK Free Trade Deal – Lord Deben
Solidarity emerged from the 2016 Scottish Parliament elections with 14,333 votes which made them the 3rd best supported pro-independence party in Scotland and the best supported socialist party in Scotland (discounting the Dugdale led Scottish Labour party) but it wasn't enough to secure representation in the parliament. So like many small parties it is hard to be taken serious or have any impact in society without the platform afforded by a parliamentary seat. So how would I raise the spirits of my small socialist party assembled in the Mary Barbour room of the Pearce Institute in Glasgow's Govan on Saturday morning?

READ MORE: Courting Disaster: Why Are the Dutch Boosting NATO Cooperation in the Arctic?

I sought assistance from two unlikely sources for my opening remarks, Dalai Lama and Muhammed Ali. It was Dalai Lama who offered timeless encouragement to those who perceive themselves to be too small to influence matters when he said:

While the inspiring legend that was Muhammed Ali wisely observed:

"It isn't the mountains ahead to climb that wear you out; it's the pebble in your shoe"

Two wise quotes which caution us against pessimism rooted in relative size and weight when confronting major challenges from bigger foes. The immortal ‘it's not the size of the dog in the fight that matters, it the size of the fight in the dog' should have been lumped in for extra measure.

For the Sake of the Children and Much More Besides – USE THE MANDATE
Small parties do matter and can influence the political scene. Sometimes negatively, aka the narrow minded and racist UKIP seeking to scapegoat immigrants for every social ill and promote intolerance and antagonism towards minorities, but often positively. In 1999 I was the sole representative of my small socialist party elected to a Parliament of 129 members. Yet within the four year term I was able to win support for the first Private Members Bill of that Parliament and secure abolition of the ancient and abhorrent practice of poindings and warrant sales which were wielded with force and shame against the poor.

I also introduced a wider anti-poverty and pro-health measure in the shape of the School Meals (Scotland) Bill which was designed to tackle the stigma often attached to free school meal provision, improve the daily diet of all of Scotland's children and ensure every child was able to access a healthy meal at school. It was a measure supported by scores of anti-poverty campaigns and lone-parent charities as well as trade unions concerned with progressive measures.

Scotland First Minister Quits BBC Event Over Bannon's Invitation
The Scottish Parliament debated that proposal in June of 2002 and the Green member, the SNP members and the independents all backed it. Disgracefully, however, the Labour, Liberal and Tory Members of the Scottish Parliament united in shame to vote it down. They said it was too costly thus exhibiting willful blindness to the mounting health costs associated with increased obesity and obesity related type 2 diabetes while ignoring the evidence from countries like Finland who now benefit from reduced health expenditure due to their bold investment in free and healthy school meals.

These same unionist MSP's voted consistently to support nuclear weapons expenditure but protested that we couldn't afford to provide a free and healthy school meal to Scotland's school pupils. No wonder I was raging at them in 2002.

These short-sighted politicians have brass-necks as bright as lighthouses. The same comfortable MSPs and MPs who pontificated against free school meals in 2002 from within the Liberal and Labour parties are now supporting calls for free school meals in Scotland and across the UK.

Of course the stunted vision doesn't stop there. In the course of my 8 year stint within the Scottish Parliament I also introduced Private Members Bills to re-nationalise the railways. It was voted down in 2005 but now Labour and SNP back the measure. I wanted to ban public sales of airguns without production of a licence. It was voted down but is now in force.

EU Must Be Joking Theresa
I wanted to replace the inherently unfair council tax with a fairer and redistributive income based alternative. It was voted down but is now official SNP policy. My party promoted a free prescriptions bill which was voted down but is now in force across Scotland. My party promoted a health approach to drugs misuse instead of a criminal approach which we said was counter-productive and expensive. We advocated legalising cannabis and other illegal drugs under a strict licencing and regulation regime. We were ridiculed, attacked and opposed. Now just about every party has changed their attitude and policy position on tackling drug misuse to be closer to ours.

READ MORE: POTUS in Scotland or Is It My Wife? Twitter Pokes Fun at Mad Cow Disease Case

The point is that what appears to be a minority view emanating from a smaller political party at one juncture in time can quite often become a widely shared view. Solidarity passed policies calling for a maximum wage as well as a minimum wage. For every business and employer to be compelled to pay each employee at least £10 an hour, a living wage to tackle the unacceptable and growing incidence of ‘the working poor'.

Instead of individuals being required to fill in long and complicated forms to access Housing Benefit, Working Families Tax Credit, Council Tax support, all measures which effectively subsidise employers who pay low wages, we should have a business support scheme which assists those small businesses genuinely unable to pay as much as £10 an hour.

Never Cross a Picket Line – Don’t Be a Scab
Such a scheme would cost less and be much more efficient in targeting cash were necessary. The Asda, Tesco, Morrisons, Amazon, Boots and other big stores and employers who currently have their low wage policies underwritten by central government benefits would instead have to pay real living wages to their staff. Small businesses with small profits margins can qualify for financial support. Properly staffed tax and benefit agencies can ensure abuses of the system are rare while society as a whole would benefit from the increased spending power and dignity attached to a workforce paid properly.

Instead of longer working weeks and extending the retirement age lets implement a unitary state pension, earlier retirement and a 4 day working week. A living pension would be easily affordable if the pensions and finance industry was publicly owned and run for the maximum benefit of everyone instead of the enrichment of the few. Retiring at 55 on a living pension will not only extend the quality of life in later years but help create millions of jobs for young people often without prospects.

So too would a shorter worker week. In addition, all the credible research shows that shortening the working week will not hamper productivity but enhance it.

So we all left our Solidarity conference in Glasgow on Saturday convinced that another and better world is possible and committed to human and political solidarity as our philosophy of life.

We will redouble our efforts to fight for an independent and socialist Scotland, a democratic republic seeking friendly and cooperative relations with other peoples in other nations across the planet.

The world of permanent war, racism, bigotry and intolerance is all the Trumps and trumpets at the top of society have to offer. We reject that. We say there is a better world to be won and to those who accuse us of being ‘dreamers' we say yes, ‘but we're not the only ones'. We don't just imagine there is a better world we are determined to secure it for our children and our loved ones.

The views and opinions expressed in this article are solely those of the contributor and do not necessarily reflect Sputnik's opinion.