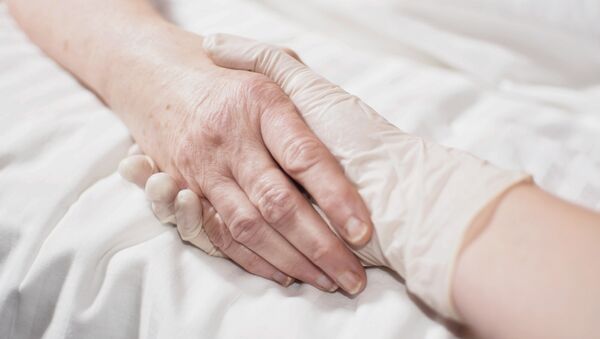 CC BY-SA 2.0 / Alberto Biscalchin / Euthanasia
Subscribe
The Dutch authorities have started their first-ever judicial proceedings for a breach of euthanasia laws. According to a statement by a public prosecutor in The Hague, a doctor gave a severe dementia sufferer a ‘secret’ dose of a sedative right before obtaining approval for the procedure. The medical complaints board has already found her guilty.

Sputnik discussed the issue with Professor Theo Boer, who teaches ethics at Groningen's Protestant Theological University and is a leading expert on the ethics of assisted dying.

Sputnik: This is a very difficult topic to talk about. I have had several discussions with various experts, and there were people who are pro and definitely against assisted dying: euthanasia. We will delve into this, but first let's talk about this particular case and what you personally think about this.

Theo Boer: This is a groundbreaking case, because for the first time in 16 years the Dutch government will now prosecute a physician that has performed euthanasia. The matter is so important because here a lady was euthanized who no longer was competent, she was in a deep stage of dementia.

'World's Happiest Country' Denmark Sees Rise in Pre-Teens Turning Suicidal
Before the euthanasia the doctor had put something in her coffee to sedate her; but then, when the doctor wanted to kill her, she resisted and she had to be constrained by the family members and the doctor in order to be killed. So, the question here is: how far do we go in euthanizing patients. I have to add one thing; she did request euthanasia in an advanced directive.

Theo Boer: The question really is whether it was a breach, because the law says that a doctor may be allowed to act on the basis of an advanced directive of a patient; so, that is what she did. The tender committee said that the fact that they sedated her, made her sleepy before the euthanasia, took away from her the possibility to resist the euthanasia. They really should have stopped euthanizing her as soon as they found out that she was resisting.

Sputnik: If I am correct, it said that the lady had signed off on a paper where it said she wanted euthanasia if she was competent in her mind at the time, which, of course, she was not.

Theo Boer: There are really two questions here. One is what kind of advanced directive we may use; and the other one is when somebody is in a state of incompetence, are we at all allowed to euthanize this person? There is a very salient feature here, and that is that the controlling committee of the Dutch government just one week ago approved another case which is very similar. That makes us confused.

The other case that was approved was of a woman who also had an advanced directive and she was given sedatives in a much higher dosage so that she could no longer wake up when the euthanasia was performed; and this case was approved. It leaves everyone in confusion over what is allowed and what is not.

Sputnik: It certainly seems to be a really grey area legally and morally, isn't it?

Welfare Concerns as More Finns Go Childfree Amid Lowest Ever Birth Rates
Theo Boer: What you see here is that whereas in the 1990s Dutch physicians were in the forefront of having euthanasia legalized in the case of terminal cancer, for example, most doctors now are very reserved about euthanizing a person who is no longer knowing what is going on.

Sputnik: In this particular trial, will it be an important precedent?

Theo Boer: Yes, it will, because in the Dutch system, of course, as in most countries, a verdict of a judge will make clear to what extent you can implement the law. This is a very important case. Again, what is confusing is that the review committee had just approved another case which is very similar. We'll see what happens; and maybe what we'll see here is a kind of a fight between two different committees — there's the Euthanasia Review Committee that has approved the last case, and there's the Public Prosecutor, who says "no, you are overstepping a boundary."

Sputnik: Of course, as you have just said, the Netherlands was in a way a trailblazer when it came to legal suicide; what is your take on the practice in the Netherlands currently?

Theo Boer: I was on the Euthanasia Review Committee for 10 years in which I saw about four thousand cases. I have seen the development since 2005, from euthanasia being a last resort, an exception in the case of intolerable suffering, to a kind of a normal way or a preferred way to die.

I think that that development is a wrong one. The Dutch law still forbids euthanasia and says that it should be a last resort; but the public goes on seeing euthanasia as a normal way to die. I think here we have entered a slippery slope that no one really anticipated, which is alarming.

Sputnik: Of course, the number of people euthanized is growing. In the Netherlands it is expected to exceed 7,000 this year; that's a 63% increase since 5 years ago. That's huge.

Without a Court Order UK Hospitals May Dehydrate Patient to Death - Counsel
Theo Boer: Yes, and it's not only 63% increase since 5 years ago, but it is a 250% since 10 years ago. It is a huge increase. There's one little detail that must be said that it seems that this year, the development is going down. In the first 9 months of 2018, the number of euthanasia cases was down 9% in comparison to the same period of last year.

What may happen now is that we have come to a point where doctors say "Okay, no more; enough for us. We will no longer cooperate in expanding this practice." But really, it's too early to say.

The views expressed in this article are solely those of Professor Theo Boer and do not necessarily reflect the official position of Sputnik.