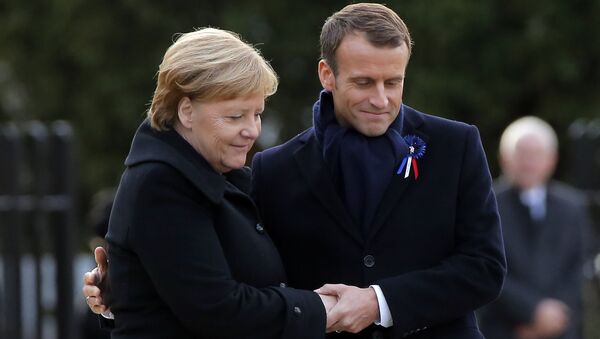 © AP Photo / Michel Euler
Subscribe
AfD leader Alexander Gauland remarked that the Chancellor’s promenade with French President Macron through the milestone Arc de Triomphe indicates her strive to reverse and twist history, so that she finds herself in a historic moment that “favours” the strong, “the winner.”

German Chancellor Angela Merkel should not have taken part in an official ceremony marking the centennial anniversary of the end of fighting in World War One, since it is an event for the “winners”, the leader of the right-wing party Alternative for Germany (AfD) Alexander Gauland noted. He stressed that Germany lost the war and Merkel was attempting to rewrite history by participating in the landmark gathering for the former coalition.

'We can't put ourselves in a historical situation that clearly favours the winner and walk alongside Mr. Macron through the Arc de Triomphe,' he said, referring to yesterday’s grand Remembrance Day ceremony at the Arc de Triomphe in the French capital, which brought together dozens of heads of state from all over the world.

According to the official program of the event, the political leaders gathered on Sunday was to commemorate those who fell in the 1914-1918 'Great War' and recognize the need for global reconciliation and an awareness of the dangers of ultra-nationalism and Nazism, which critics say the AfD essentially plays down.

Public support for Alternative for Germany (AfD), a Eurosceptic party, has increased by 1 percent recently to a record 16 percent, a poll revealed in late summer. The AfD’s agenda has gained momentum largely due to its Eurosceptic and anti-Islamist stance, with the party drawing support from crowds of voters unhappy with Merkel’s contentious decision in 2015 to welcome roughly a million mainly Muslim asylum seekers into Germany.

After first meeting at Saturday memorial events in Paris and its suburbs, roughly 70 world leaders headed on Sunday to Paris’ Arc de Triomphe for an official ceremony marking this year’s anniversary of Remembrance Day. On the day, exactly 100 years ago, an armistice was signed in the Compiegne Forest, north of Paris, bringing an end to fighting in World War I; peace was formalized by the Treaty of Versailles the following year, on November 11, 1919.