Polish Nationalists To March in Warsaw After Mayoral Ban Overturned 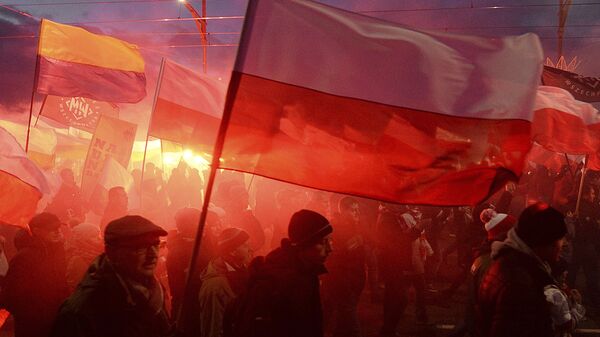 "What brings us together is (Poland's) white and red flag," Interior Minister Mariusz Blaszczak told state broadcaster TVP on Saturday. "I invite everyone to attend".

One year ago, some 60,000 people took part in a march marked by calls for ‘White Poland,' and banners like 'pure blood, clear mind'. This year, the Polish government believes some 200,000 people will attend the event.

Donald Tusk Again Lashes out at Donald Trump as US-EU Row Deepens
Almost immediately after the mayoral ban was lifted, Poland's President, Andrzej Duda, announced an alternative 'inclusive' march to take place on the same route. Now that the ban has been overturned, it is not clear whether both events will occur simultaneously.

Concurrently, police officers have gone on strike demanding a pay increase, prompting the government to ask for military assistance with security. Police then announced the end of the strike citing an agreement with the Interior Ministry days before the event, according to the Independent.

The Defence Ministry said the march will nonetheless be accompanied by armoured vehicles, even though none are incorporated in security measures, Reuters reports.

The United States Embassy in Warsaw has reportedly issued a security alert ahead of the march.

Polish demonstrators will again be joined by foreign counterparts from Hungary and other European nations, as they have done for several years, the Independent reports.

Polexit? Tusk Warns of 'Very Serious Threat' of Poland Leaving EU by 'Accident'
Foreign participants confirming their attendance include Milan Mazurek, a Slovak lawmaker who once said on social media that the history of Nazi Germany and the Holocaust had been 'distorted,' according to Reuters.

Polish Prime Minister Mateusz Morawiecki stated that authorities would do everything in their power to crack down on any expressions of extremism at the march.

Critics of the ruling Law and Justice Party (PiS) say the government is not willing to curb a growing nationalist and right-wing mood. Promoting Catholic values and patriotism in public life and increased state influence in the economy, the PiS-led government has also initiated an inquiry into whether EU laws are compatible with Poland's internal legislation.

European Council President and former Prime Minister of Poland, Donald Tusk, who has long opposed the right-wing Law and Justice party, warned that Poland could be expelled from the EU due to the nationalist policies in the country.