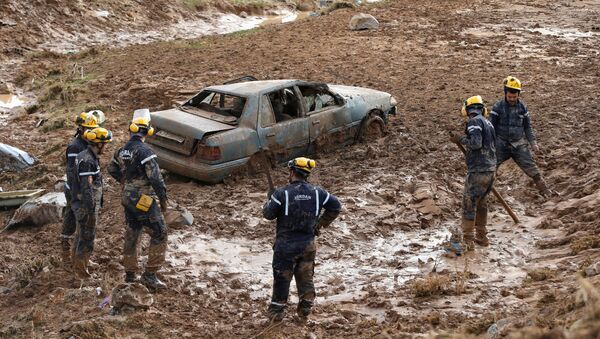 The number of fatalities from mudslides caused by floods in Jordan has climbed to 11, Jordanian government spokeswoman, Jumana Ghunaimat, said in a statement.

"The relevant services have rescued two citizens in the Al-Wala area… The rescuers have also found the body of one of those people who had been registered as missing, and thus the number of fatalities has climbed to 11," Ghunaimat said.

She went on to say that hundreds of civil defence servicemen were currently involved in search and rescue operations. Two people are currently reported missing.

​The Ammon news agency has reported that a self-defence forces' diver died in Madaba due to the natural disaster.

In Maan, a child was injured as a result of the flooding, according to the broadcaster Jo24.

WATCH: Severe Flooding Hits Ancient City of Petra, Prompts Mass Evacuation
On 9 November all the visitors to the Petra Archaeological Park in southern Jordan were evacuated and the site was closed amid the heavy rains and flooding. The number of those evacuated has reached 3,762, according to local media reports.

The Middle Eastern country's Tourism and Antiquities Ministry announced that all guided tours, scheduled for 10 November had been cancelled due to bad weather conditions. Moreover, several roads leading to the Dead Sea were blocked off on the same day.

The Education Ministry, in turn, has cancelled classes in all schools and higher educational institutions.

A video, posted by Alghad News, shows a water canal in Petra.

In late October, flash floods killed at least 18 people as a school bus carrying over 30 people was swept away in the Dead Sea area.

Meanwhile, in neighbouring Saudi Arabia, the roof of Riyadh King Khalid International Airport has been damaged by the heavy rain, according to local media reports.