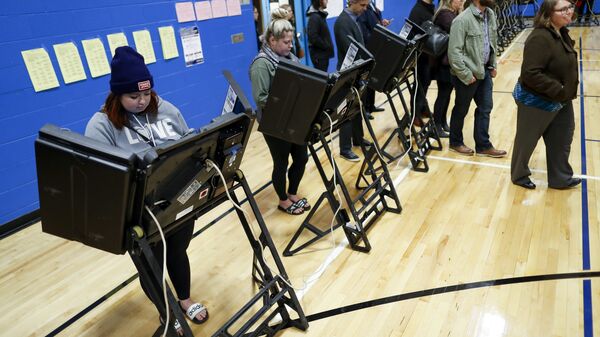 © AP Photo
Subscribe
International
India
Africa
Authorities in Florida on Saturday ordered a vote recount in the southern state’s Senate and governor races, amid tit-for-tat accusations of fraud from both the candidates, AFP reported.

Florida's 67 counties had been given until midday (1700 GMT) on Saturday to submit unofficial totals. State law triggers a machine recount if the difference in a race is within 0.5 percent.

Once machine recounts are completed, if the difference in the races are at 0.25 percentage points or below, a hand recount will be ordered, AP reported, citing Florida Department of State spokeswoman Sarah Revell.

READ MORE: 2018 US Midterms: Why Trump Says They Were a 'Tremendous Success'

The new midterms development returns Florida to the center of a major political firestorm, 18 years after an infamous presidential recount left control of the White House undecided for over a month.

Election officials in Florida's counties must finish machine recounts by 3 p.m. on Thursday.

US President Donald Trump commented on Florida's tense elections on Friday, with the leader taking Rick Scott's side by telling reporters that the federal government could get involved. Trump added that "all of the sudden they are finding votes out of nowhere."

"What's going on in Florida is a disgrace," Trump stated.

Widespread accusations of voter fraud by Democrats against Republicans and vice versa have kept that state's electoral workers busy, according to reports.