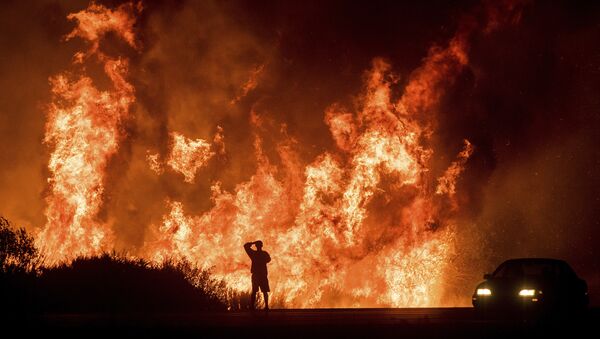 "Today, President Donald J. Trump declared that an emergency exists in the State of California and ordered Federal assistance to supplement State, tribal, and local response efforts due to the emergency conditions resulting from wildfires beginning on November 8, 2018, and continuing," the White House said in a statement late on Friday as the death toll in the fires rose to nine people.

Meanwhile, Butte county authorities said late on Friday that around 52,000 people have been evacuated due to the disaster, dubbed the Camp Fire. Moreover, the fire has destroyed over 6,000 structures in the area, according to the official figures.

"It's my sad duty to report that we now can confirm a total of nine fatalities," Butte county Sheriff Kory Honea said during a Friday press conference whose video was published on the sheriff's Facebook. The Camp Fire exploded on Thursday quickly spreading across California.

Breaking: #Campfire in Butte County has destroyed over 6,700 structures and is now over 90,000 acres. The fire has killed 9 people and is now the most destructive wildfire in California history. #CaliforniaFires pic.twitter.com/VtvY6040ws

Additionally, the San Francisco Chronicle has called the Camp Fire the most destructive wildfire in California's history. According to the outlet, the flames have covered over 90,000 acres of land.