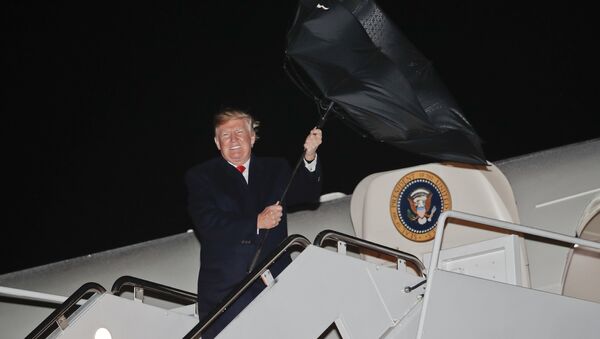 The news provoked a flood of comments online, most of which were meant to rebuke the current “pathetic” “White House occupant,” whereas others butted in with more light-hearted remarks, calling attention to Trump’s earlier reported “inability” to operate umbrellas.

According to the White House, US President Donald Trump cancelled a Saturday trip to a US World War I military cemetery in France due to weather conditions.

He and his wife Melania had been scheduled to fly to the site of a 1918 battle that US Marines led against German forces after talks with his French counterpart Emmanuel Macron.

'Can't Figure It Out?': Trump Ridiculed for Failing to Close Umbrella (VIDEO)

Nicholas Soames, an MP for Britain’s Mid Sussex and grandson of Winston Churchill, took to Twitter on Saturday to lambast ”pathetic” President Trump over cancelling the cemetery visit due to bad weather.

"They died with their face to the foe and that pathetic inadequate @realDonaldTrump couldn’t even defy the weather to pay his respects to The Fallen," Soames tweeted. He even accompanied his post with a hashtag saying Trump is "not fit to represent his great country."

Other Twitterians quickly followed suit, chuckling over or, conversely, referencing with pain the reasons why the Trumps abstained from the visit:

Rain, heel spurs… he does anything to avoid anything to do with the military apparently. Embarrassing.

He is unfit to be president. Horrible conduct.

The “disgraceful” act was naturally elaborated on:

Meanwhile, the young Men who were sent to their deaths have to lie in the rain 😒 #WorldWar #PoppyFascism.

Others opted to post pictures of other heads of state setting examples of how to “honour their fallen”:

This is how Real Leaders honour their fallen in ‘Light Rain’
SHAME ON TRUMP! #RememberThem #TheFallen #France #LestWeForget pic.twitter.com/8JgHoaMaNZ

Hilarious remarks also naturally arrived, with some social networkers recalling the recent umbrella incident involving Trump, who just tossed it to the side without bothering to give it to his staffer on board Air Force One.

In his defense (and I'd be the last guy to ever defend him), the current occupant of the White House doesn't know how to use an umbrella. pic.twitter.com/zDnJ5qLzA1

Not entirely Trump's fault, no one has shown him how to properly operate an umbrella

One brought up his famed hay yellow tresses and tan:

His hair and spray tan would be ruined. Can’t have that from the most selfish man ever!

A couple of netizens drew parallels with other events that Trump did not cancel due to rain, namely a golf clash:

Rain wasn’t slowing Trump down on this day… pic.twitter.com/zfknqAY5NE

On Sunday, November 11, as many as 70 world leaders will gather at the tomb of the Unknown soldier at the Arc de Triomphe in Paris to celebrate the 100th anniversary of the end of World War I, which was officially brought to an end by The Treaty of Versailles in on 11 November 1919.