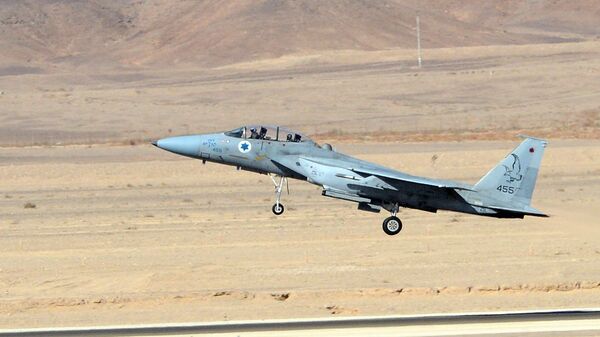 CC BY-SA 2.0 / U.S. Embassy Tel Aviv / DSC_0461
Subscribe
International
India
Africa
The US is seeking to push all foreign military forces from Syria, the US ambassador to the country said. Besides Russian ones, of course.

"Russia has been permissive, in consultation with the Israelis, about Israeli strikes against Iranian targets inside Syria. We certainly hope that that permissive approach will continue," Jeffrey said during a press conference, according to Business Insider.

US-Led Coalition Strikes Kill 26 Civilians in Eastern Syria - Reports
Earlier in October, Russia delivered its S-300 air defense systems to Syria following an incident in which a Russian Il-20 aircraft was shot down by a Syrian S-200 missile because of maneuvers carried out by Israeli jets.

Iran is another key ally of Syrian President Bashar Assad, besides Russia. However, Israel considers Tehran its number one enemy and vowed to fight Iran's military build-up in the bordering Syria.

The Il-20 incident has underscored the risks connected with having several military forces in one war theater, Jeffrey added.

"Our immediate effort is to try to calm that situation down and then move on to a long-term solution," he said.

According to Jeffrey, the US aims to move towards a political solution of the conflict and make sure all foreign militaries withdraw from Syria — besides Russia, of course.

"The Russians, having been there before, would not in fact withdraw, but you've got four other outside military forces — the Israelis, the Turkish, the Iranian and the American — all operating inside Syria right now. It's a dangerous situation," Jeffrey said.

Pompeo, De Mistura Discuss Need for Unhindered Aid Access in Syria - State Dept
So far, Tehran has said it will stay in Syria for as long as President Bashar al-Assad wants them to. Like Russia, Iran has an official invitation of President Assad to be in the country.

Earlier in June, Assad stressed that he invited the allied fighters into his country and he would never ask them to leave, as the United States and Israel are demanding, even as part of any peace settlement.

Turkey, on the other hand, has staged two incursions into northern Syria since 2016, which aim to curb Kurdish forces that now engage remaining Daesh forces, with support from the US and the Coalition.

Jeffrey said Washington took Turkish concerns about its support for the Kurdish fighters seriously, limiting weapons supply to the Kurdish-led Syrian Democratic Forces. According to Jeffrey, this step has slowed recent SDF operations against Daesh.