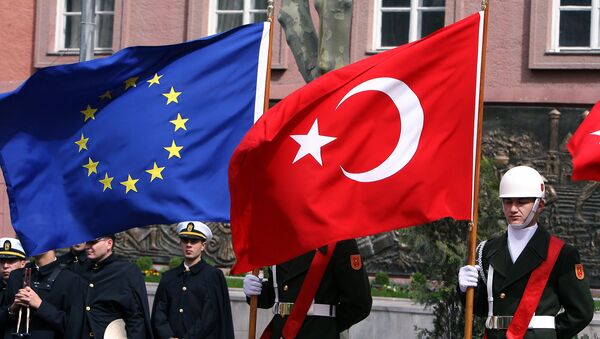 © AP Photo / Burhan Ozbilic
Subscribe
International
India
Africa
EU Enlargement Commissioner Johannes Hahn has proposed that it would be "more honest" to scrap Turkey's membership talks. Speaking to Sputnik, Turkish and Russian academics shared their views on the prospects of Ankara's admission to the EU and whether it really corresponds to Turkey's national interests.

The decision to stop the negotiation process on Turkey's EU membership can be made only by a majority vote of EU members, therefore individual statements do not play a role, apart from the fact that for a little while they prompt a certain tension in society, says Can Unver, head of the department of political science and international relations at Istanbul University Ayvansaray.

Unver's comment has come on the heels of EU Enlargement Commissioner Johannes Hahn's statement, which he made during an interview with Die Welt.

"I think that, in the long term, it would be more honest for Turkey and the EU to go down new roads and end the accession talks," Hahn said.

According to Unver, this statement can be regarded as yet another round in a series of rapprochement and estrangements between the EU and Turkey.

"The growth of populist, right-wing radical sentiments observed today in Austria and Germany has a direct impact on the EU structure," the political scientist told Sputnik Turkey. "Experts say that radical forces are gradually gaining considerable weight in the European Parliament; it has already become a kind of sporting interest for them to make anti-Turkish statements. We regularly see such attacks targeting the negotiation process with Ankara. On the other hand, these statements cannot substantially affect the situation in relations between Ankara and Brussels."

World
Turkey Seeks to Trade in National Currencies With Russia, China, Iran
The academic stressed that nevertheless, Europe cannot refuse to cooperate with Turkey due to the latter's unique geopolitical location at the crossroads of regions as well as its closeness to the Mediterranean, the Black Sea, the Middle East, the Caucasus and the Balkans.

"Only Turkey can bring an end to the negotiations, not Brussels," Unver opined. "The problem is that the EU has an extremely cumbersome internal structure. Therefore, the adoption of significant decisions is regularly postponed and the issue remains up in the air."

He has drawn attention to the fact that EU fears with regard to Turkey had so far proven to be unfounded: unemployed Turkish people have not flooded the EU, quite the contrary, Turkey has become home to millions of refugees from Syria, Iraq and Afghanistan.

"I think it is necessary to be patient and wait a bit", Unver suggested. "What if Turkey itself soon gives up the idea of joining the EU? I think one should not rush to answer this question."

For his part, Sezgin Mercan, a political observer and researcher at the department of political science and international relations at Baskent University, highlighted that "differences within the EU are related not only to Turkey's membership, but to the future of the bloc."

Mercan referred to the fact that the European Parliament had split between Eurosceptics and those who support the idea of a united Europe. Given the influence of German and Austrian political circles on the EU and European Parliament, in particular, one should not expect a positive outcome for Turkey, he suggested.

Turkey’s EU Membership Bid: 'Everybody Sees This as Necessary Fiction' - Analyst
However, Alexander Kamkin, a leading researcher at the German Studies Centre of the RAS Institute for European Studies, believes that the commissioner's statement was nothing less than an EU decision which may soon turn into reality.

According to Kamkin, the European Union is the United States of Europe, where national sovereignty is limited or abolished. That means that new EU member states delegate a substantial part of their national powers to Brussels, he pointed out.

In contrast, "Erdogan is building a sovereign state, where, in fact, Turkey itself is declared the number one value," the Russian scholar highlighted. "However, for European liberal politicians, the number one value is a specific individual, deprived of such values as family, religious affiliation, nation, and ethnicity."

He warned that "Turkey's entry into the EU is fraught with a risk of losing sovereignty," adding that "this alone does not allow us to talk about bringing the positions of Turkey and Europe closer together."

Kamkin believes that Turkey cannot turn into yet another "railcar" of the "train" called the European Union.

"The EU requirements involve such serious problems on which Turkey cannot compromise: the Kurdish issue and the role of the army in the country's policy. It is unprofitable for Turkey to embrace them — this means giving up independence," the scholar insisted.

Turkey & Germany Are Dependent on Each Other on Economic, Migrant Issues - Prof
Additionally, Kamkin noted that "there are suspicions that some points [of the EU-Turkey admission deal] were made in such a way that Turkey, with all the desire to fulfil them, would not cope with this task."

Therefore, he presumed, Turkey is unlikely to join the EU in the coming decade. According to Kamkin, EU-Turkey cooperation is possible within the framework of bilateral economic agreements.