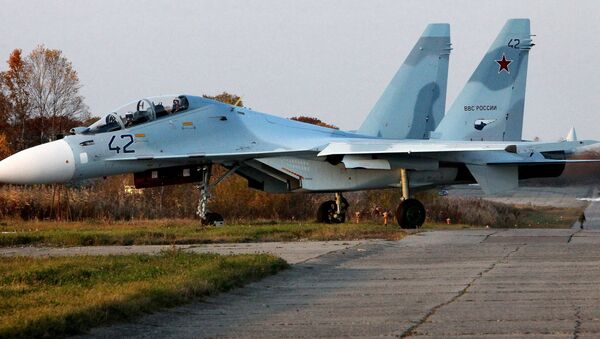 The military has taken a series of measures to ensure the security of Russia's southern flank amid NATO's growing presence in the Arctic, Eastern Europe and the Black Sea.

The Russian Aerospace Forces completed drills in the skies over Crimea and the region of Kuban in Southern Russia on Friday, with Ministry of Defence television channel Zvezda releasing video footage of aircraft engaging in anti-missile evasive manoeuvres, as well as the detection and destruction of simulated enemy air and ground targets using their autocannons and missiles.

The drills involved Su-25, Su-30M2, and Su-27SM3 aircraft from the Southern Military District, with the planes carrying out over 40 sorties aimed at destroying about 80 'enemy targets' at Crimea's Opuk training ground and the Temryuk district in Krasnodar territory.

Russia, China and Mongolia wrapped up the largest military drills in post-Soviet history in September, with nearly 300,000 servicemen, 36,000 tanks, armoured personnel carriers and other vehicles and over a thousand aircraft involved in the exercises. Russia has beefed up military readiness on its western borders in recent years amid a growing NATO military presence in Eastern Europe, including new divisions, large-scale alliance drills, and the deployment of US missile defence systems in Romania and Poland.