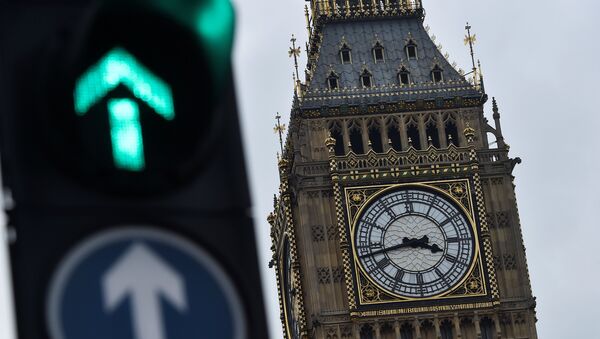 © REUTERS / Hannah McKay
Subscribe
Earlier, the United Kingdom voted to leave the European Union in a referendum in June 2016 and is expected to do so by late March 2019, while there are still certain stumbling blocks that impede talks, notably the border in Ireland.

Democratic Unionist Party (DUP) Brexit spokesman Sammy Wilson said on Friday that regulations were settled in Europe and imposed on Northern Ireland in a move that 'breaks the Union', Reuters reported.

The spokesman also noted that UK Prime Minister's Theresa May stance in negotiations is a betrayal and she has breached the promise.

"That to us is a breach of the promise which has been made that we would not be cut off from the rest of the United Kingdom," he said.

Brexit Brought Ireland Unification Issue to Centre of UK, EU Debate - Filmmaker
When commenting on the prime minister's letter, he said that it showed that the UK was not delivering on its promises to Northern Ireland and that a range of concerns had emerged. The official also noted that he was more disappointed than angry with May's approach.

Wilson stated that the DUP hoped to turn PM May around, stressing that it was not too late to change her mind.

Earlier, Reuters reported, citing a letter from UK Prime Minister Theresa May obtained by The Times, that the EU was considering the creation of a customs border in the Irish sea between Northern Ireland and the rest of the United Kingdom in the event of a no-deal on Brexit.