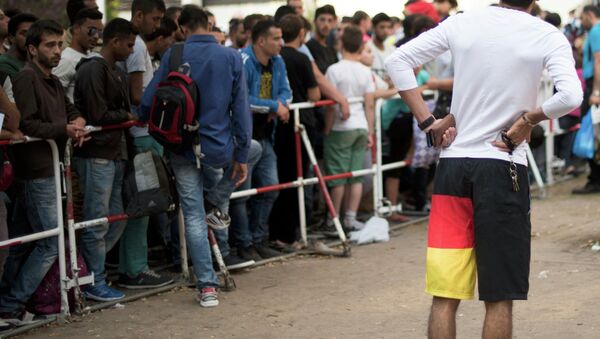 © REUTERS / Stefanie Loos
Subscribe
The party called on the government to follow the US and Austria’s example and refuse to sign the international guidelines for tackling migration. It also slammed the country’s government for keeping quiet about the deal, which would turn Germany into “a settlement area.”

The Bundestag, Germany's parliament, has rejected a motion brought by the Alternative for Germany party, which demanded that Berlin should not ratify the United Nations Global Compact for Migration. The decision is not binding, and the German government was free to sign the agreement, introducing guidelines for migration regulations around the world, anyway. But the vote was preceded by heated debates.

"Millions of people from crisis-stricken regions around the world are being encouraged to get on the road. Leftist dreamers and globalist elites want to secretly turn our country from a nation state into a settlement area," AfD leader Alexander Gauland argued, as Deutsche Welle reports.

The AfD has also faulted the German Cabinet of the Christian Democratic Union, its Bavarian sister party Christian Social Union and their coalition partners the Social Democrats, whose representative Heiko Maas heads the Ministry of Foreign Affairs, for trying to rush the pact secretly. According to the party, it was backed by “mainstream” media.

"Just a declaration of intention, hardly worth talking about, that's why it wasn't necessary to inform the public in advance," said Gauland.

This lack of communication and public discussion has been criticized by some CDU lawmakers ahead of the debates in the Bundestag.  They also complained that the agreement in its current form doesn’t distinguish between forced and labor migration.

While Health Minister Jens Spahn, who seeks to replace Angela Merkel as the CDU's leader following her upcoming departure, demanded that the agreement should be examined carefully, Christian Democrat Marian Wendt stated earlier that he would oppose signing the global migration pact in its current form together with several colleagues. At the same time, he insisted on debates to prevent right-wing politicians from shaping the discussion with “false allegations.”

Despite debates within the party, the CDU still supported the pact, claiming it’s in the interest of Germany. The party’s Stephan Harbarth fought the AfD criticism, saying “those who vote against this pact are acting against the national interests of Germany." The CDU insisted that the UN agreement wouldn’t encourage migration. It is to “standardize the norms around the world” to deal with the issue, reaffirming every country’s sovereignty to manage migration. Incidentally, German law would not need any changes.

"When there is the talk of creating access to basic welfare and basic health care, then those are minimum standards that have already been implemented in Germany long ago – we have to try and make sure they are introduced in other parts of the world," he said.

Left Slam Pact as Weak in its Core

Criticism of both sides of these debates – the CDU and the AfD – came from the left. Die Linke slammed the right-wing party for its “sordid campaign of fear” around the pact and criticized the government for the lack of information. As for the UN pact itself, Die Linke’s Sevim Dagdelen stated that the agreement didn’t address the causes of migration, in her view, including global free trade deals and the arms industry.

The international deal is expected to be adopted at a dedicated Intergovernmental Conference which will be held in Morocco on December 10-11. The GCM represents the global community’s attempt to establish a common approach to dealing with international migration.

Washington withdrew from the talks on the deal in 2017, and Vienna followed its example last Wednesday. Budapest has also criticized the deal, saying it represents a threat to national security. Last week, Poland's Prime Minister Mateusz Morawiecki said Warsaw was likely to abandon the deal, too. Czech President Milos Zeman also opposed the agreement recently, while Prime Minister Andrej Babis announced his intention to reject it.