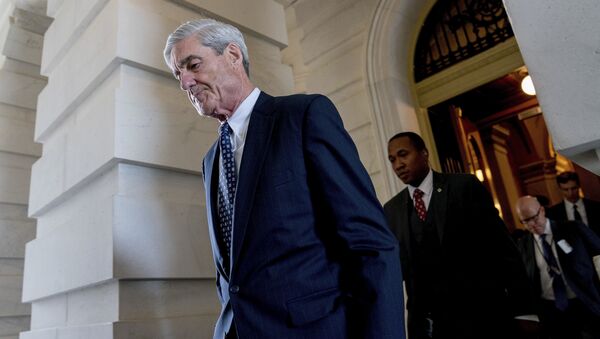 © AP Photo / Andrew Harnik
Subscribe
WASHINGTON (Sputnik) - US Attorney General Jeff Sessions resigning at the request of President Donald Trump a day after the Republican’s lost control of Congress fueled concerns among Democrats that Special Prosecutor Robert Mueller’s investigation might be in jeopardy.

Sessions has long faced criticism from Trump for recusing himself from Mueller’s investigation of Russia’s alleged meddling in the 2016 presidential election. Mueller is also probing possible collusion between Moscow and the Trump campaign, allegations both sides have repeatedly denied.

In fact, Trump has repeatedly referred to Mueller’s probe as a "witch hunt."

Republican control of both chambers of Congress had actually checked the ambitions of the Democrats, who have been warning for months that once they capture the House they will intensify congressional probes into Trump’s ties to Russia.

As a result of Tuesday’s midterm elections, the Republicans lost that control because although they kept the Senate, the Democratic Party seized the House of Representatives.

Hence, the timing of what Trump tweeted on Wednesday struck many as conspicuous.

Sessions in his resignation letter on Wednesday said he had resigned "at the request" of Trump.

"In my time as Attorney General we have restored and upheld the rule of law," Sessions said in the letter addressed to Trump. "We have operated with integrity and have lawfully and aggressively advanced the policy agenda of this administration."

As the top official at the Justice Department, Whitaker is now in charge of the Mueller probe because he outranks Deputy Attorney General Rod Rosenstein, who took charge due to Sessions' recusal.

Whitaker has previously questioned the scope of the Mueller probe, writing an opinion column for CNN last year charging that the investigation would be going too far if expanded to include Trump family finances.

The move of course set off fireworks among Democratic lawmakers. US Senate Minority Leader Chuck Schumer shortly after the news broke said in a statement that Whitaker in his new role should recuse himself from overseeing Mueller's investigation.

"Given his previous comments advocating defunding and imposing limitations on the Mueller investigation, Mr. Whitaker should recuse himself from its oversight for the duration of his time as acting attorney general," Schumer said via Twitter on Wednesday.

Despite Dem House Majority, Trump Wins Midterms Thanks to ‘Blue Wave’ Failure
House Minority Leader Nancy Pelosi, in a separate statement, said US Congress must take action right away to protect Mueller's investigation against Trump’s attempt to undermine it by firing Sessions.

About six Congressional Democrats including Senators Bernie Sanders, Elizabeth Warren, Ron Wyden and Cory Booker stressed that Trump may be attempting to disrupt the Mueller investigation and called on Whitaker to recuse himself.

The American Civil Liberties Union (ACLU) Executive Director Anthony Romero said in a statement on Wednesday that the US Senate must ensure that whomever Trump nominates to replace Sessions will not interfere in Mueller’s Russia investigation.

However, the ACLU had a few other choice departing words for the now former Attorney General.

"Sessions was the worst attorney general in modern American history. He was an egregious violator of civil rights and civil liberties," the ACLU statement said. "Sessions allowed the Department of Justice to function as the political arm of the Trump administration to undo fundamental rights that protect each of us, disregarding years of legal precedent and settled law."

Steve Bannon: US Deputy Attorney General Should Be Fired for Obstructing Justice
Hours after Trump’s tweet, the new Acting US Attorney General Whitaker in a statement said that he vows to uphold the rule of law and lead the Department of Justice with the highest ethical standards.

Trump’s nomination of a permanent replacement for Sessions will require confirmation by the US Senate, which remains in Republican control following Tuesday’s midterm elections.

Moscow has repeatedly rejected allegations of election meddling, characterizing them as unfounded fabrications and attempts by US politicians and media to fuel Russophobic hysteria.