US is Unable to Balance Global Oil Market, It's 'Beyond Their Control' – Prof 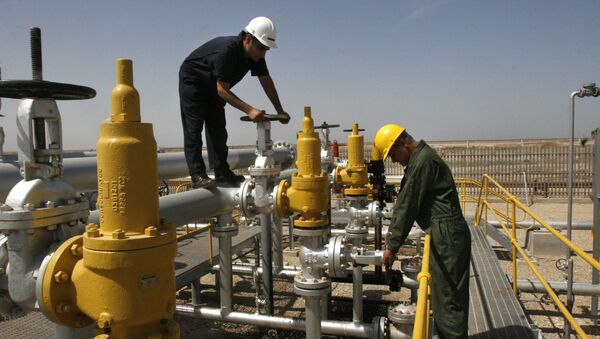 © AP Photo / Vahid Salemi
Subscribe
Oil prices have rebounded after falling to their lowest point since August on reports that Russia and Saudi Arabia are discussing oil output cuts in 2019. Earlier, Iran's President Hassan Rouhani stated that Tehran will continue selling oil no matter what.

Sputnik discussed the current state of the oil market and sanctions against Iran with Professor Hafez Abdo from Sheffield Business School at Sheffield Hallam University, UK.

Sputnik: In your view, will Iran be able to keep up oil exports amid the US sanctions?

Hafez Abdo: To some extent yes, Iran will be able to export some of their oil especially to Russia and Turkey, to their closest neighbours, but in the long term they will have problems, because the sanctions are going to affect the Iranian finance sector, which will influence investment in the whole oil and gas industry, where production and supply is going to suffer.

Sputnik: Iran's Minister of Petroleum claimed that the Trump administration had artificially reduced oil prices, can you elaborate more on that?

Hafez Abdo: Obviously they will try to make some stories and send some signals to the oil and gas market. They can influence the price on one hand, and also assure their stakeholders that everything is going to be fine with them, so they're political signals.

Sputnik: Tehran has stated that the US sanctions won't fix the oil imbalance on the market, what are your thoughts on that?

Iran's Oil Minister Urges OPEC to Halt Work of Oil Cuts Monitoring Committee
Hafez Abdo: First of all, they created a kind of tension between them and their strongest ally Saudi Arabia when they had that problem with the disappearance of the Saudi journalist in Turkey, so America interfered significantly and severely in that story and that created tension between them and Saudi Arabia.

The Americans, before, they made an account, and they said to themselves, and this is what they have been signalling to the international community: that they will have sanctions on the Iranians and they expected that Saudi Arabia is going to compensate for the shortage in international (oil) supply.

However, because of that problem, which United States created for themselves and with no good reason, and they've shaken the trust between them and Saudi Arabia, they can't now count much on Saudis to compensate in the market.

This is why we've seen what was expected from the Trump administration, to say that eight countries can trade oil with Iran. They've gone back and allowed Iran to sell oil to eight countries but, however, in the long-term this is going to affect the Iranian supply for sure.

What I'm trying to say is that the US and the Trump administration are not able to balance the international oil market, it's beyond their control. Saudi Arabia is out of the equation to some extent.

If the sanctions were strong and severe enough not to allow Iran to sell their oil, oil prices would probably be $300 or $400 a barrel and America knows this, so they wanted to create a kind of balance in the market and the only way is to let the Iranians sell their oil.

How long is this going to last? We don't know because politics change a lot, the American election has changed the picture, what we're going to see in the near future is probably a weaker Trump administration. How that's going to influence the international oil and gas market, we still don't know.

Sputnik: Iranian officials promised a strong response to US sanctions, we even heard that some officials threatened to block the Strait of Hormuz, in your opinion, how would Tehran respond?

Japanese Oil Importers to Consider Iranian Deliveries Amid US Sanctions Waiver
Hafez Abdo: The Iranians are powerless at the moment, probably the Iranians are trying to send a signal that Europe is still behind them, but the in case of a conflict the Europeans will be supporting the Americans. I'm not sure that any of the European countries are going to break their political, economic and social relationship with the United States because of Iran.

Iran is in its weakest position, they're not players on the international market now, they can only do what is dictated to them, they have very small space to move, but in the longer term things may change, because I live in the UK where we say politics is very similar to the British weather, it changes very quickly and can't be predicted.

Sputnik: Oil prices rebounded on reports that Russia and Saudi Arabia are discussing oil output cuts in 2019, in your view professor, how long lasting will this trend be?

Hafez Abdo: The relationship between Saudi Arabia and the United States is kind of shaken at the moment. Saudi Arabia officials are trying again to send signals to the Americans by going and trying to say we're going to agree with Russia, which America would never want to see.

I don't believe Saudi Arabia is going to agree with Russia on any target or any goal that America would not like. When it comes to practice, it may not have any grounds for application, it's not in the interest of Saudi Arabia to cut supply at the moment because oil prices are increasing, so it's to their benefit to sell oil at a higher price, it's not in their interest to increase the tensions between them and their supporters, America, this is geopolitical play. I don't see a strong connection between the Saudis and the Russians and a political divorce between the Saudis and the Americans, that will never happen, in my view.

Sputnik: Can you give us your short-term forecast on oil prices?

Hafez Abdo: Oil prices will keep going up, taking into account that we're coming into winter, the holiday season is fresh now, there's less use of oil and gas around the world happening now so it's natural to expect oil prices to slow down a bit, but in the medium-term oil prices will hit $100 a barrel or a bit more.

Sputnik: Do you think Europe will continue to support Tehran and distance itself from the United States?

Trump: Iran Sanctions Waivers Won't Drive Oil Prices Up to $150 Per Barrel
Hafez Abdo: This may happen only to try to enhance the economic situation, however, I don't see Europe as diversifying their economic or political relationship with Iran in any way.

They will try to economically and politically make some gains. At the same time they want to be close to Iran, so they don't want Iran to be isolated and completely connected with Russia, so they want to be in between Russia and Iran.

However, when it comes time, I think Europe will not support Iran at the expense of their relationship with America.

We've seen something very similar when the Europeans and America aligned together against Iraq; they went together against it for no reason and they suffered coming out of it, they were united against one target. So Iran is the target now, everybody's trying to take a larger piece of the cake, the relationship between Europe and the United States is very strong and will not be influenced by any country in the world, I think.