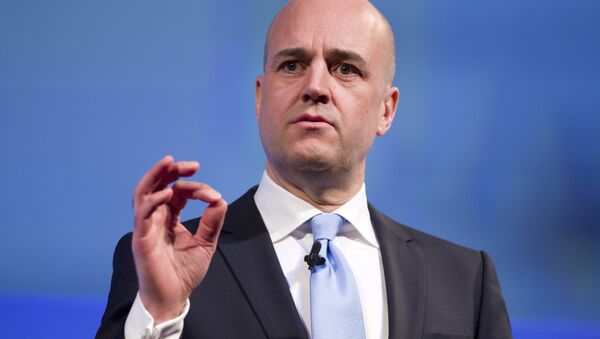 In a post-US election interview with Aftonbladet, a Swedish daily, former Moderate party leader Fredrik Reinfeldt, known for his call on fellow Swedes to "open your hearts" and embrace mass immigration, argued that the rise of the right to power in the US and elsewhere was "horrific to follow".

Among others, Reinfeldt claimed that US President Donald Trump built his electoral base by "promoting overt racism" and "appealing to hatred and cynicism", stressing that Trump's campaign painted the US as "under attack" from illegal immigrants.

According to Reinfeldt, the Democrats winning the House in midterms "sparked a glimpse of hope".

Lastly, Reinfeldt warned against "strong men" coming to power in other countries, such as Brazil's newly elected President Jair Bolsonaro. The Swedish mainstream media spared no effort in labelling him a "far-right extremist" and a "right-wing populist".

"We have far too many leaders who pursue aggressive nationalism and put their country first", Fredrik Reinfeldt told Aftonbladet, alluding to Trump's motto 'America first' and Bolsonaro's 'Brazil first', a trope previously used by US Presidents Woodrow Wilson and Warren Harding.

Reinfeldt's gibe was met with sarcasm among Swedish politicians and ordinary users alike.

Gustav Kasselstrand, the leader of the right-wing anti-immigration Alternative for Sweden party, tweeted that Reinfeldt "went full Arnstad", in a nod to the "never go full retard" quote from the movie "Tropic Thunder". Henrik Arnstad is a Swedish left-wing and anti-fascist author and journalist known for labelling right-wing politicians Nazis. Other users picked up the joke by tweeting "Never go full Reinfeldt".

​"Being scolded by Reinfeldt is the best grade you can get as a politician. It's like being scolded by Pol Pot or Satan", journalist Maria Celander tweeted.

"Does Rheinfeldt have any opinions of his own at all? Or does he just repeat what the left and the globalists say? Biggest 'fake right' ever," user Erik Neader tweeted.

Another user went on to post a screenshot of Reinfeldt photoshopped into a variant of the NPC meme followed by the "orange man bad" caption.

​Until the Sweden Democrats became politically prominent, the Moderate party (previously known as the Right) was the largest counterweight to the centre-left Social Democrats, who governed Sweden for most of the 20th century. During Reinfeldt's tenure, the party moved to the centre and embraced multiculturalism.