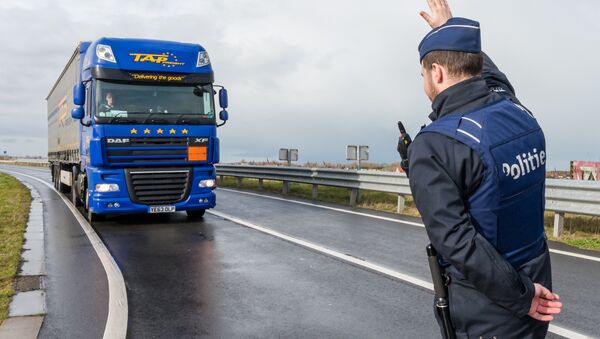 Witnesses in a small village in Britain and a commune in northwestern France were startled to see groups of migrants who risked their lives in order to travel from the European continent to Britain.

Since the onset of the migrant crisis in 2005, hundreds of immigrants have attempted to cross European borders in order to reach their destination, whether on the continent or on British Isles.

Trucks and lorries traveling in the EU have been commonly used as means of transportation by illegal migrants and people smugglers. This week, two fresh cases of people jumping on trucks traveling from continental Europe to the United Kingdom were recorded by onlookers and police authorities. 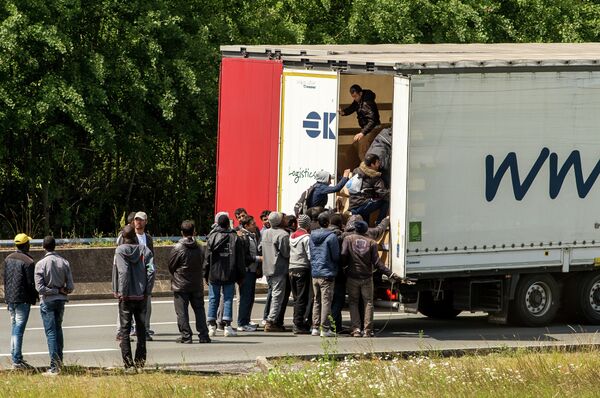 Migrants climb in the back of a lorry on the A16 highway leading to the Eurotunnel on June 23, 2015 in Calais, northern France
© AFP 2022 / PHILIPPE HUGUEN

A stunned member of the public reported to the police 13 men with sleeping bags jumping off a Bulgarian HGV in the English village of Mereworth.

"Kent Police was called at 9.22am on 31 October 2018 to reports a number of people had exited the rear of a lorry in Seven Mile Lane. Officers attended the scene and detained seven people, who were then conveyed to the Home Office immigration facility in Dover," a spokesperson for Kent police told Sputnik.

The witness said the lorry driver, who appeared in a hurry, was getting the men out of the lorry and wasn't trying to stop them.

"They all had sleeping bags with them. They must have only just got through the port an hour before," the witness said.

According to the UK National Crime Agency (NCA), many Eastern European truckers would give in to financial temptation and get paid to smuggle migrants into the UK.

WATCH: Migrants Make Terrifying Leap From Moving Truck Before Fleeing UK Highway
Another incident occurred in the Normandy town of Ouistreham, where a number of refugees were seen running alongside a British lorry in an attempt to jump on it and travel to a ferry port in northern France.

Ouistreham is located near the terminal at Caen, which is often seen as a destination for migrants trying to cross the English Channel to Britain.

French authorities have detained the men who tried to leap on the British truck, risking their lives.