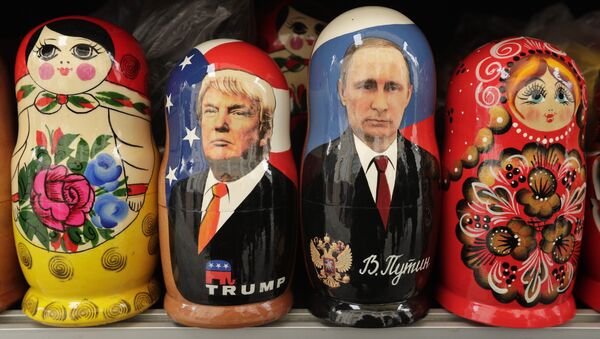 © AP Photo / Dmitri Lovetsky
Subscribe
International
India
Africa
The two-year investigation by US special counsel Robert Mueller into alleged Russian interference in the 2016 US election has yielded scant evidence. That didn’t stop fearmongering about a Russian repeat in the 2018 midterms, of course, but now those claims, too, remain unsubstantiated ‒ and even the Democrats have dropped the Russiagate storyline.

The two-year investigation by US special counsel Robert Mueller into alleged Russian interference in the 2016 US election has yielded scant evidence. That didn't stop fearmongering about a Russian repeat in the 2018 midterms, of course, but now those claims, too, remain unsubstantiated ‒ and even the Democrats have dropped the Russiagate storyline.

The 2018 midterm elections in the US — when Americans voted for congressional as well as state and local offices but not for the presidency — have come and gone with no signs of the alleged hack attacks by Russian operatives that mainstream media sites and US intelligence officials promised us were sure to come. So now, just like after 2016, the question remains: where's the proof?

Throughout the year, promise after promise was made, warning bell after warning bell sounded: the Russians were far from done manipulating Americans and their electoral system, and if you thought 2016 was bad, just you wait for what's coming. A June Vanity Fair article, whose vagueness on specifics was matched only by the fever pitch of its apocalyptic hysteria, warned that for Russia, "2018 will likely be a testing ground for 2020," in which it would "do everything it can to ensure [Trump's presidency falling apart] doesn't happen," including hacking voting booths, "quadrupl[ing] their efforts on social media," and most nefariously, "they'll do things [intelligence officers] haven't even thought of yet."

Other publications did their part to make sure Americans knew whom to fear and whose fault it was if the November 6 elections didn't go their way or encountered any sort of problem: it was the Russians; it was always the Russians.

Russiagate Is Dead - At Least for Democratic Midterm Candidates
​Director of National Intelligence Dan Coats made sure the flames were fanned with provocative and terrifying rhetoric. In February, Coats told the Senate Intelligence Committee, "There should be no doubt that Russia perceives its past efforts" to disrupt the 2016 presidential campaign "as a success," and it "views the 2018 midterm elections" as another opportunity to conduct an attack, the Washington Post reported at the time. Two weeks prior, then-CIA Director Mike Pompeo warned that he had "every expectation" Russia would try to disrupt the midterms.

In July, Coats cried that "the warning lights are blinking red again" and that the threat posed by Russian cyberattacks was akin to the stepped-up terror threats the US faced immediately prior to the September 11, 2001, terrorist attacks in which 3,000 Americans died.

Yet by October, even as Trump was continuing to give the Russiagate investigation attention in his remarks, Democrats were suddenly abandoning this narrative, once it proved to fall politically flat in motivating voters to visit the polls. "From September 18 to October 15, zero airings [on broadcast television] mentioned Robert Mueller, Russia or the Mueller investigation," a Wesleyan Media Project study on election advertising published on October 18 found. Politico noted that Democrats' ads shifted toward issues voters were more interested in, such as the economy, health care and taxes.

By early November, the New York Times was forced to admit a strange problem: "Where are the Russians?" asked the Times' David Sanger, who's spent much of the last year attributing every conceivable computer problem around the world to the work of Russian hackers. There was "surprisingly little on the hacking front," said Google's director of software engineering, Shane Huntley.

And now, after the election is all said and done, did any of the apocalyptic predictions from Vanity Fair — hacking voting booths, destroying the power grid, producing fake footage with fake audio to "make real news seem fake, and fake news seem real" — come to pass?

Hardly. Wired reported that late Monday night, Facebook took down about 30 Facebook accounts and 85 Instagram accounts because it feared they might be associated with the Internet Research Agency (IRA), a recurrent boogeyman in the Russiagate narrative that is ostensibly responsible for sowing discord in the US by posing as politically opinionated Americans online.

Facebook didn't have proof there was any connection; they deactivated those 115 accounts just in case. That's about all anyone has been able to produce with regards to any of the allegations of Russian hacking in the last year: we think the Russians might have been behind it; it seems like the kind of thing they might do, but we don't have proof. Yet amazingly, this logic has served as the foundation for the most baleful and harrowing warnings about Russian hacking.

Of course, this was also the case in the 2016 election, as investigative journalist Gareth Porter told Sputnik last month. Porter noted in an exhaustive number-crunching study that Facebook itself said that IRA content accounts for "only 0.0004 percent of the total content" seen by the 29 million people Facebook judged to have gotten at least one IRA story in their feeds over the two-year period leading up to the 2016 election, which he called "an astounding number." In other words, 11,600 people may have seen one IRA story once in the lead-up to the 2016 election. Hardly the storm described in the Russiagate narrative.

Twitter Notifies Over Million of Its Users About Alleged Russian Accounts

As was claimed about 2016, the disinformation campaign by these alleged Russian-linked accounts was aimed at "cleaving our polity, distracting us with feuds large and small — by sowing discord through technology platforms and services" as Nick Bolton's apoplectic Vanity Fair piece alleges. Yet as Andrew Weiss, the vice president for research on Russia for the Carnegie Endowment for International Peace, acknowledges, "[Russia is] not the creator of this problem." That makes it hard to take seriously claims that it's Russia who's undermining American democracy.

After all, the biggest problems encountered Tuesday could not possibly be attributed to Russians, or to pernicious actions by any maleficent person acting by computer. It wasn't a Denial of Service attack that shut down Georgia's voting machines, it was power cords mysteriously missing in a Snellville polling location; it wasn't at Russian President Vladimir Putin's direction that South Dakota suddenly changed the rules regarding voter IDs, depriving tens of thousands of Native Americans of the right to vote; and it wasn't a power outage that purged hundreds of thousands of African-American voters from Georgia's voter registration sheets.

It also wasn't St. Petersburg agents that cancelled a planned "crowd control" exercise in a border city half a mile from a polling station on Election Day — that was US Border Patrol, which is under the direction of the US Department of Homeland Security, not the Russian GRU.

"We're not gonna get the dirt because the dirt's not there," journalist and political cartoonist Ted Rall told Radio Sputnik's Fault Lines Wednesday. "It just never made sense from the beginning."

​Rall said he expected Mueller to claim a great deal but provide little proof for it. "The Democrats are going to be let down by this in a big way. Let's just play this out: that report [from special counsel Robert Mueller], by the way, is not even going to be released to the public; it's going to be in one of those locked rooms. So in the end, you're going to wind up with something that's kind of like the last scene of ‘Indiana Jones.' It's just locked away so that nobody can see."