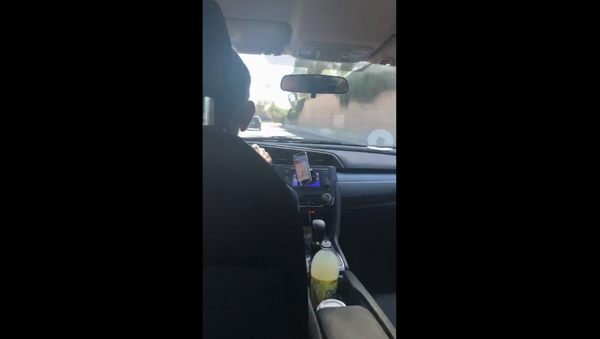 © Screenshot/Tara Strong
Subscribe
Actresses Tara Strong and Rena Sofer were heading to a phone bank in support of US House candidate Harley Rouda for California's 48th District on Tuesday when their Uber ride turned sour as the driver realized the pair were Democrats.

The video, which was shared online by Strong, an actress who has voiced dozens of beloved cartoon characters, shows the unidentified driver repeatedly calling the women "evil, racist, demon, crazy lefties" who were ruining the US with their politics.

"Your driver almost killed Rena Sofer & I because we are Democrats," Strong tweeted, tagging the rideshare company. "He asked what we were doing & proceeded to scream & yell at us & say we were evil racist demon crazy lefties."

"We told him we wanted to get out & he began driving erratically. We video taped his abuse," she added.

​Although the footage begins after the initial confrontation took place, Sofer did indicate via Twitter that the driver inserted himself into their conversation after he overhead the duo discussing the importance of the US midterm elections. "He said he's heard that every election. Then he asked why and proceeded to yell at us," she wrote.

Throughout the recording, the driver can be heard calling the women "racists" and "terrible riders," and saying that Democrats "have mental disorders." The dispute continued even as the driver was instructed to pull over at a nearby gas station.

"You involved yourself in our conversation," Sofer told the driver. "It was none of your business, and you've been attacking us and insulting us and yelling at us. You sound like Trump's mouthpiece, ‘You're a leftie, you're evil, this is democracy.'"

When Strong chimed in, saying she was "excited" to share the footage with the folks at Uber, things escalated even further, with the driver claiming Strong and Sofer wanted him to lose his job because they didn't agree with his viewpoints.

It's unclear what exactly happened after Sofer's remark, as the video cuts off. However, within just a few short minutes, Uber Support responded to the recording on Twitter, telling Strong that they "absolutely want to take a closer look" into the incident.

This altercation comes on the same day that Uber is offering residents $10 off their rides to the polls. By contrast, fellow rideshare company, Lyft, is giving customers 50 percent off of rides or offering them at no cost for those living in underserved communities on Election Day, according to Vox.