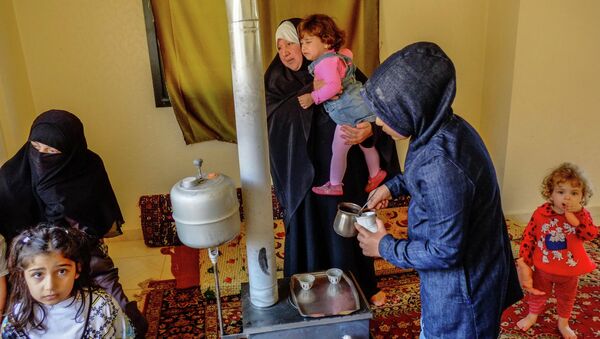 DAMASCUS (Sputnik) - About 20,000 refugees who had fled Syria because of the war and been living in neighboring Lebanon have returned to their homes since the beginning of 2018 via the Jaydet-Yabus checkpoint near Damascus, deputy head of the Russian Defense Ministry's Center for Syrian Reconciliation, Maj. Gen. Yevgeny Kharchenko, told reporters.

"According to our registration data, since the beginning of 2018, more than 20,000 refugees have returned to their places of residence [via the Jaydet-Yabus checkpoint]," Kharchenko said.

Russian FM: Israeli Strikes in Syria Will Increase Regional Tensions
Many refugees from Syria were forced to spend over a year in Lebanon. Abdullah Ahmad Aswad fled to Lebanon with his family seven years ago.

"There was a difficult life, I was a laborer, I was paid little money. When it became safe in Syria, we decided to return here," he told reporters, adding that his relatives are waiting for him in the city of Yalda in Eastern Ghouta.

According to the Reconciliation Center, there are about 1.5 million Syrian refugees in Lebanon, which has a population of just over six million people. About 380,000 left Syria for the neighboring country when the civil war began. Since July 18, more than 29,000 refugees have returned to Syria from Lebanon and Jordan.

As the Syrian government has regained control over most of the country's territories that were seized by terrorists, it is now focusing on creating favorable conditions for repatriating refugees. Moscow is assisting Damascus in this process, along with providing humanitarian aid to civilians and serving as a guarantor of the ceasefire, together with Turkey and Iran.