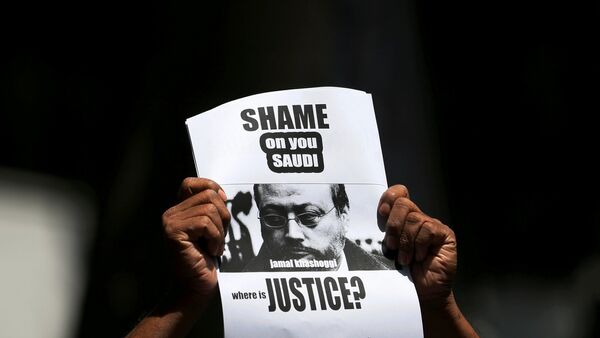 The boycott comes a few days after the Washington Post published Turkish President Recep Tayyip Erdogan's op-ed in which he specifically urged Riyadh to answer key questions on the death of Saudi journalist and Washington Post contributor Jamal Khashoggi in Istanbul last month.

Thousands of Twitter users in Saudi Arabia have pushed for the boycott of Amazon.com and its regional subsidiary to slam the Washington Post for covering the assassination of Saudi journalist Jamal Khashoggi; the Washington Post is owned by Amazon chief executive Jeff Bezos.

The Boycott Amazon and Souq.com online campaign was launched by Saudi social media users over what they see as the newspaper's biased coverage of the death of Khashoggi, who worked as a contributor for the Washington Post.

"Let's defend our nation […] boycott Amazon to send a message to its owner so he is aware of the scale of the damage," Saudi journalist Bandar Otyf tweeted, adding that the Washington Post "consistently publishes articles that are defaming."

"It became clear before our eyes that this is an organized media war. As Twitter users and activists and citizens, we don't have power abroad, but we have simple things like boycotting. […] If we affect even a portion of their business, we're satisfied," Otyf underscored.

The campaign came after Turkish President Recep Tayyip Erdogan pointed out in his op-ed in the Washington Post last Friday that Saudi Arabia has yet to answer a whole array of questions pertaining to Khashoggi's killing.

"Where is Khashoggi's body? Who is the 'local collaborator' to whom Saudi officials claimed to have handed over Khashoggi's remains? Who gave the order to kill this kind soul? Unfortunately, the Saudi authorities have refused to answer those questions," Erdogan wrote.

He argued that the order to kill the journalist "came from the highest levels of the Saudi government." At the same time, Erdogan emphasized that he does not believe "for a second that King Salman, the custodian of the holy mosques, ordered the hit on Khashoggi."

The Washington Post has repeatedly underlined the lack of accountability concerning suspected perpetrators of Khashoggi's death.

On October 2, Khashoggi was killed inside the Saudi consulate in Istanbul, where he had arrived to obtain necessary papers for his upcoming wedding.

Merkel Calls on Saudi King to Conduct Transparent Probe Into Khashoggi’s Murder
Saudi authorities denied ordering his death, but admitted that the journalist, who fled the country last year, died in an altercation with several men inside the consulate building, in what Saudi Foreign Minister Adel al-Jubeir described as a "rogue operation." According to Riyadh, 18 people have been arrested over their involvement in the incident.

Turkish public prosecutor Irfan Fidan suggested that Khashoggi was "strangled as soon as he entered the consulate" in sync with "premeditated plans" and that his body was "subsequently destroyed by being dismembered, once again confirming the planning of the murder."