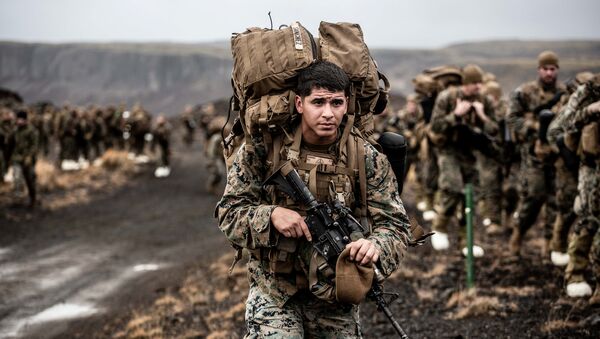 The incident reportedly left the man, who cannot stay calm in stressful situations due to his illness, traumatized, shaking with fear and struggling with sleep problems.

A handicapped man suffering from autism and other problems was handcuffed and frisk after going for a walk too close to a military facility housing 200 soldiers during the major NATO exercise Trident Juncture, the local Norwegian daily Namsdalsavisa reported.

According to the newspaper, the man went for a routine stroll around an old industrial building which had been converted into temporary barracks.

When he came closer, heavily armed NATO soldiers told him to stop. When he apparently did not follow the orders, they perceived his behavior as suspicious, apprehended him, put him into handcuffs and searched him to ensure that he posed no danger to the ongoing drill.

"I wasn't standing still, but I did not run from them either. They had rifles. The soldiers grabbed my hands, held me tight and told me to keep my hands behind my back. Then they put me into handcuffs and used the keys to lock them. It was disgusting. I've got bruises," the 46-year-old man said, as quoted by Namsdalsavisa.

The man's relatives said he had sleep problems and was left traumatized by the incident. According to them, his diagnosis implied difficulty staying calm during stressful situations. They also underscored that he never would try to run away from the soldiers.

Commander Captain Frank Staurset confirmed the incident. According to him, the man didn't follow orders, instead moving quickly from the place, a behavior that the soldiers on patrol perceived as suspicious. However, Staurset regretted that the man was arrested and apologized for the military's way of handling the situation.

"We just have to regret that he got that experience and we will do what we can to restore his confidence in us. At the same time, I would like to emphasize that our soldiers did the job they were trained to do."

NATO's Trident Juncture drill, which involves over 50,000 soldiers from over 31 countries including formally non-aligned Finland and Sweden, is the largest to take place in Norway in decades.