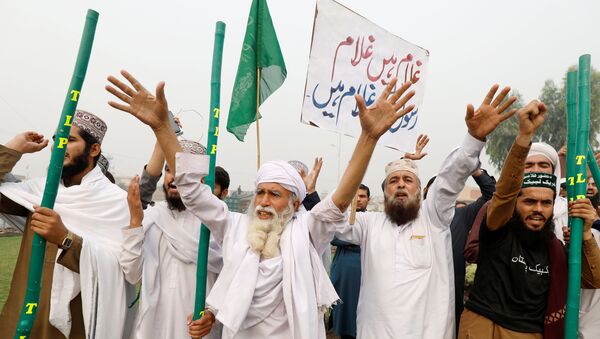 Geert Wilders, the head of the Netherlands' opposition right-wing Party for Freedom, or PVV, has stirred up the Muslim world with his promises to ban the Koran, close down mosques and create a Prophet Muhammad cartoon competition. While some threatened to kill him, others have fought for banning the politician on Twitter, citing “hateful conduct."

The Netherlands’ foreign ministry has stated that they are “dealing with threats to the Dutch ambassador to Pakistan over the tweets of right-winger Geert Wilders.

"We take the security of the embassy very seriously, and that is also the subject of consultations between the Netherlands and Pakistan. For security reasons, I cannot make any further comments," the ministry spokesman said.

Several reports recently suggested that Pakistan's interior ministry issued a secret memo, saying the hardline Islamist Tehreek-e-Labaik Pakistan party (TLP) planned to "target" the envoy of the European country. However, the party, which is pushing for Sharia Law in Pakistan, refuted the allegations.

The secret document referred to the reports, stating that “elements associated with the TLP” were planning “to seek revenge for uploading of blasphemous caricatures by Geert Wilders, Dutch parliamentarian, on his personal Twitter account."

Wilders, head of the right-wing Party for Freedom, who is internationally known for his anti-Islam remarks, had planned to stage a Prophet Muhammad cartoon competition this year. Given that physical depictions of God and the Prophet Muhammad are forbidden in Islam, the contest prompted fierce opposition from the Muslim world, especially Pakistan, where the TLP led protests to sever diplomatic relations with the Netherlands.

The contest didn’t take place, as Wilders announced his decision to cancel it in August, referring to death threats from Muslims and concerns that other people might be in danger. However, he has shared several such images on Twitter.

The reports about the death threats have coincided with the attempts to ban the politician from social media.  The Turkish Islamic Cultural Federation (TICF) has sent a letter to Twitter demanding a "permanent ban" of Wilders "due to continuous publications on his Twitter account of messages, images and other content which is a display of hateful conduct."

The federation, which represents 144 Turkish mosques in the Netherlands, pledged to sue Twitter if the social network keeps mum on the TICF's formal request to ban Wilders within three weeks.