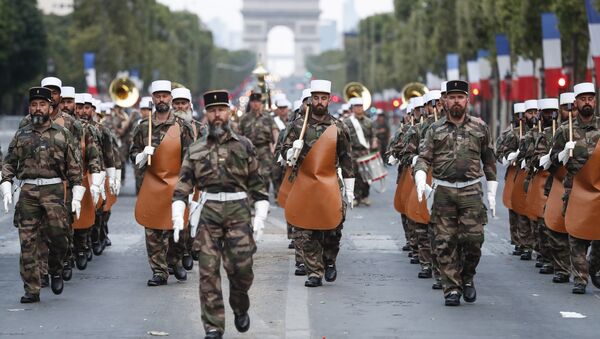 French President Emmanuel Macron gave a candid interview to the French radio station Europe 1, in which he spoke about school violence, European elections, and the EU's military policy.

Emmanuel Macron said on Monday that the EU should create a "real European army" and called the bloc the main victim of Washington's decision to scrap a 30-year-old nuclear arms treaty with Russia.

"We will not be able to protect Europeans if we don't decide to have a real European army," he told Europe 1's Nikos Aliagas, insiting that Europe should be defending itself in a "more souvereing way," without depending "only on the United States."

Macron called for "protection from China, Russia, and even from the United States of America," suggesting that Donald Trump's recent decision to pull the US from the INF Treaty would endanger European security.

"Who is going to be the main victim [of US President Donald Trump decision to leave the INF]? Europe and its security," the president said.

US President Trump announced on October 20 that the United States would withdraw from the 1987 Intermediate-Range Nuclear Forces Treaty (INF Treaty), claiming that Russia had violated the agreement, which prohibited ground-based intermediate-range systems. Kremlin spokesman Dmitry Peskov refuted Trump's accusations and warned that Russia would be forced to take measures to ensure its security if Washington started developing weapons that had been banned under the agreement.

The French President also called for a "stronger, protective Europe," as well as bemoaned that the continent is becoming "increasingly fractured" and that nationalism is on the rise these days.

This mirrors his November 1 interview to Ouest-France newspaper, in which he warned that the resurgence of nationalism across Europe may eventually plunge the region into a situation similar to that which arose in the 1930s. He also insisted that both nationalism and the influence of foreign powers pose a threat to Europe’s sovereignty, adding that he seeks to promote "a more sovereign and multilateral" Europe.

For years, the European Union has exerted efforts to strengthen own defense capabilities, including via defense spending increase. Earlier this year, the European Commission announced that the bloc's 2019 budget stipulated allocation of 245 million euros (about $287 million) for the European Defence Industrial Development Programme.

At the same time, the US defense industry has also been putting a lot of pressure on EU nations to equip themselves with imported US equipment. France is also subject to such pressure. But in France, the industrial and defense industry strengthened under Gaullism is still powerful enough to resist this influence.