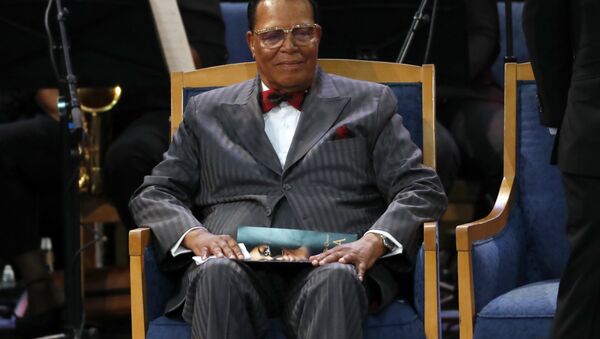 Louis Farrakhan, the head of the contentious religious group Nation of Islam (NOI), led chants of "death to America" and "death to Israel" as he addressed students in Tehran. He visited Iran the day before Donald Trump hit it with yet another wave of crippling sanctions in a bid to pressure Iran into rolling back its nuclear program.

According to Tasnim News Agency, the 85-year-old Louis Farrakhan gave a speech at the University of Tehran on November 4, the day that marks the anniversary of the 1979 takeover of the US Embassy in Tehran, and one day before the United States re-imposed all of its sanctions on the Islamic Republic.

"You say ‘bad wa Israil,'" the religious leader can be heard saying, apparently trying to pronounce "Marg bar Israel" ("Death to Israel" in Farsi). An Iranian sitting next to Farrakhan then helps him get the phrase right. "Marg bar Israel," the latter chants with a nod, prompting the room to cheer and chant back: "Marg bar Amrika" ("Death to America").

Here is Louis Farrakhan saying “Death to Israel!” in Farsi while in Iran.

The room cheers, chants with him & Farrakhan grins.

There is photographic evidence of Farrakhan being embraced by:

In his speech at the University of Tehran, Farrakhan bashed the sanctions that the US was to re-impose on the Islamic Republic the following day. "I am coming to you from the United States of America that is gloating over the fact that the president of the United States is going to place on the Islamic Republic the most stringent sanctions that have ever been placed on any nation before," he said.

"Is it not true that you have called America ‘the Great Satan'?" he also inquired. "Well, if you believe what you say, then would not Satan be actively involved in trying to destroy a nation that is set up on the belief and practice of submission to the will of God?"

WATCH: Louis Farrakhan Refers to the U.S. as "Great Satan" during a Tehran University Speech; Says to Iranians: If You Persevere in Your Revolution Despite the Sanctions, "Victory Will Be Yours."pic.twitter.com/X2nOZvFPhS

On Monday, the United States brought back sanctions against Iran's banking and energy sectors, including the vital oil exports. They added to the sanctions that have already been introduced following Donald Trump's move to withdraw from the 2015 nuclear accord.

The US President claimed that the agreement, which curbed Iran's nuclear program, was poorly negotiated, and announced the re-imposition of sanctions to push Iran towards a "better" nuclear deal.