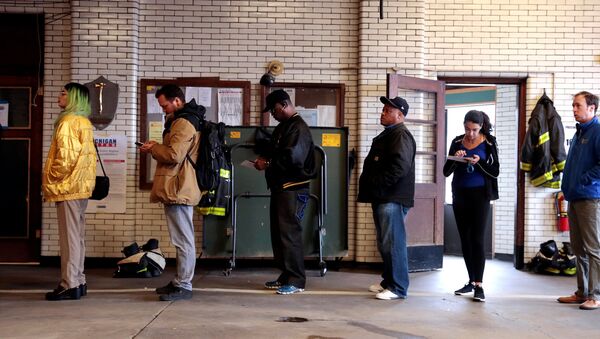 © REUTERS / Rebecca Cook
Subscribe
International
India
Africa
WASHINGTON (Sputnik) - A worry factor in US midterm elections over which party will gain control of Congress - especially the House of Representatives - appears to be greater among Democratic voters than their Republican counterparts, a new Gallup Organization poll revealed on Tuesday.

With US voters casting ballots on Tuesday to elect the entire 435-member House of Representatives, fear is especially strong among two groups of Democrats — women and those who disapprove of President Donald Trump’s job performance, the release explained.

US Midterm Congressional Elections Choice Between Results, Resistance - Pence
The publication also revealed that "nearly nine in 10 (87%) in both groups are very or somewhat worried about what will happen if Republicans hold the House."

While Americans are closely split about which party will control the House of Representatives, a substantial majority expect Republicans to keep control of the Senate, the release noted.

Sixty-one percent of Americans say Republicans will continue to control the Senate, while 33 percent predict Democrats will take control.

Gallup posited that lower levels of fear among Republicans may be related to the belief they will retain control of both chambers of Congress.