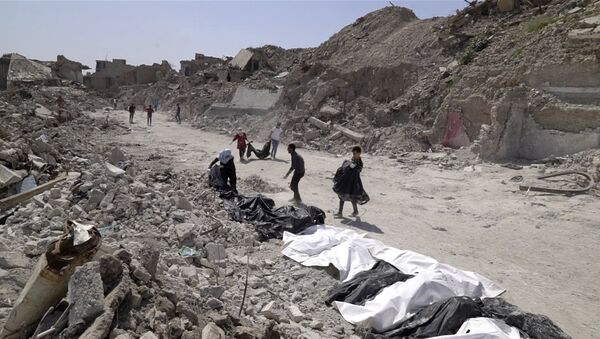 GENEVA (Sputnik) - Over 200 mass graves containing the remains of thousands of people have been discovered in Iraq on territories previously controlled by Daesh, the Office of the UN High Commissioner for Human Rights (OHCHR) said in a report released on Tuesday.

"The UN Assistance Mission for Iraq (UNAMI) and the UN Human Rights Office have documented the existence of 202 mass grave sites in the governorates of Ninewa, Kirkuk, Salah al-Din and Anbar in the northern and western parts of the country – but there may be many more. While it is difficult to determine the total number of people in these graves, the smallest site, in west Mosul, contained eight bodies while the biggest is believed to be the Khasfa sinkhole south of Mosul which may contain thousands," the report read.

According to the OHCHR, these graves may potentially contain "critical forensic material" that could be used to identify victims and shed light on the scale of crimes committed by the jihadists.

"Meaningful truth and justice require the appropriate preservation, excavation and exhumation of mass grave sites and the identification of the remains of the many victims and their return to the families," the report added.

The authors of the report said that families of these victims have the rights to know what happened to their loved ones, as many of them could have been killed in ways that may amount to war crimes, crimes against humanity, and possible genocide.

Iraq has long been suffering from activities of various terrorist groups. In 2014, vast territories of the Middle Eastern state were occupied by Daesh*. The Iraqi army has successfully fought back against the terrorist group over the past year. In December, Iraqi Prime Minister Haider Abadi declared an end to the country's fight against Daesh as Iraqi troops re-established complete control over the country's Syrian border.