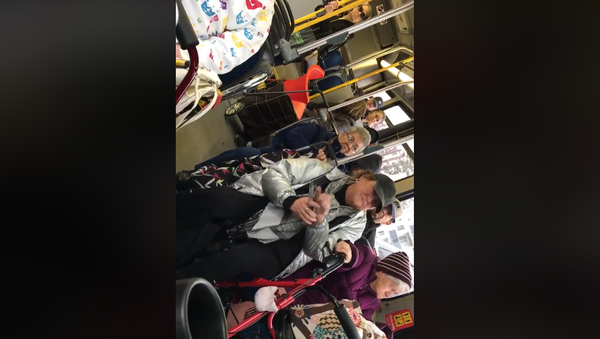 © FacebookScreenshot/DalenCardinal
Subscribe
International
India
Africa
On Thursday, a woman was kicked off a bus in Edmonton, in the Canadian province of Alberta, after yelling racist remarks at a pregnant woman. The incident was caught on camera.

"At least I didn't get knocked up," an unidentified woman in a white jacket is heard saying to a female passenger, who is reportedly pregnant.

"Well that's sad for you," the passenger, whose name is not revealed, responds. "I'm really happy."

"Yes you are, because the government supports you," the woman in the white jacket responds.

"It's none of your f**king business who supports who," a witness sitting behind the woman in white is heard saying.

The altercation was captured on camera by Dalen Cardinal, the pregnant rider's friend, who seems to have been sitting next to her on the bus.

The video was uploaded to Cardinal's Facebook account Thursday with the caption, "For the first time in my life, I experienced racism on the ETS. She first started off by calling my 8 month pregnant friend a fat b**ch and started then calling me down saying that we belong at the shelter and soooo much more, this was the end of what had happened and I wish I had caught the whole thing."

Cardinal, who was on the bus with her six-month-old son, told Global News Saturday that the woman started attacking her friend on the bus.

"She started to antagonize my eight-months-pregnant friend. She was calling her fat — a fat Indian. Saying we belong at the shelter, because we're no good for nothing Indians. Stereotyping us — saying we live off the government, and at least she didn't get pregnant young," Cardinal told the outlet.

At one point in the video, the driver is heard giving the woman in white an ultimatum.

"If you're going to talk like that, you have to get off the bus," the unidentified driver is heard saying.

However, when the woman in white continues hurling insults, the driver gets up at the next stop and says, "You know what? You can go wait for another bus." The woman in white is then seen being ushered off the bus before the video ends.

The clip, which has been shared almost 4,000 times on Facebook, already has more than 1,000 comments from social media users and has been viewed almost 300,000 times since being uploaded last week.

"Kudos to the bus driver and the lady that stood up for you!!" one user commented.

"Racism is everywhere. People say there is no racism but it is everywhere. In schools, where you work, in the hospitals the stores. You find it everywhere. Not hard to see people who are racist," another wrote.

"In a typical situation an operator would call for assistance and security resources would be dispatched and they would resolve the issue. But obviously in this case he [the bus driver] felt his safety wasn't in jeopardy and he wasn't going to tolerate this behaviour any longer," Rowan Anderson, a spokesperson for Edmonton Transit Service, told Global News.

"We're proud of our operator," he added. "He made a judgment call that he had heard enough and he gave the woman a fair warning."

"I'm thankful the bus driver and the other elderly lady had stepped in, because I don't know what would have happened if they weren't there," Cardinal told the outlet, also commending the driver's actions.

Cardinal did not immediately respond to Sputnik's request for comment.